Biological fate of nanoparticles in the body 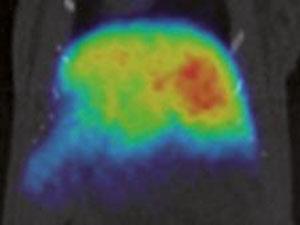 Metal oxide nanoparticles are currently used for a variety of applications including diagnostics and biomedicine. However, these nanoparticles are extremely difficult to detect and measure once they are distributed in a biological system. Now, Spanish scientists have developed a novel way for measuring their biodistribution.

Until now, labelling techniques have relied upon the functionalisation of the surface of the nanoparticle, which may alter the behaviour of the nanoparticle. Jordi Llop at the Centre for Cooperative Research in Biomaterials-CIC biomaGUNE, in San Sebastian, and co-workers, have developed a unique approach to avoid this by preparing metal oxides enriched with 18O. The 18O is incorporated to allow for more efficient cyclotron-mediated conversion to the radioactive 18F which can then be traced in vivo.

In this work, nanoparticle distribution in rats was successfully monitored and provided insight into the biological fate of the nanoparticles up to eight hours after administration. Slow elimination from the bloodstream, elimination occurring via urine and very low accumulation in the brain was confirmed.

Erik Årstad, an expert in radioactive tracers at University College London, UK, comments that although this is an ‘interesting approach’ for accessing radiolabelled nanoparticles, he has concerns over the low level of radioactivity produced and the short half life of the 18F used, as this could pose a challenge in accessing functionalised nanoparticles for imaging studies.

Llop, disagrees with this, saying the ‘levels of radioactivity are not low’ and much higher yields are obtained in comparison with other direct irradiation methods. Although he says that the process is limited by the manipulation of the nanoparticles after activation, currently, the amount of activity is enough for preclinical studies to be carried out. He also comments that if longer term studies are the end pursuit, then the incorporation of longer lived isotopes could be used.

With appropriate functionalisation of these nanoparticles, Llop says it should be possible to envisage further biomedical applications and that the group is currently working towards using these nanoparticles to perform positron emission tomography/magnetic resonance imaging.