Gone are the days when wood and leather were the only materials available for prostheses. Materials for biomedical applications in the 21st century are big business, with researchers developing advanced plastics for implants and carbon fibre for prosthetic limbs - materials that are much stronger, lighter and more durable. The demands on the prosthetics industry are several fold - comfort for the patient, biocompatibility, high performance and versatility to enable patients to lead as normal a life as possible. And even in an industry that focuses heavily on the patient, green technologies and carbon emissions need to be considered. 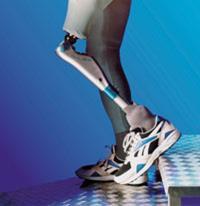 Simple vegetable fibres could revolutionise prosthetic production, thanks to research at the National Centre for Prosthetics and Orthotics (NCPO) at the University of Strathclyde, UK. Using biodegradable sustainable materials to produce prosthetic limbs would not only reduce the dependency on fossil fuels, but would also enable developing countries to produce artificial limbs in their own communities from local materials, and could help areas affected by natural disasters develop prosthetics from easily accessible materials, ensuring amputees get treated as quickly as possible.

’Prosthetic limbs are usually made from acrylic resins, supported by either glass or carbon fibre to provide structural strength,’ explains Carl Schaschke, head of the chemical engineering department working with the NCPO at Strathclyde. However, these materials are difficult to source in developing countries and require expensive fume extraction equipment due to the toxic vapours produced when working with acrylic resins.

Inspired by the motor industry that sees companies such as BMW and Audi use plant fibres to reinforce plastic mouldings in door panels, the team has been looking at incorporating vegetable and animal fibres such as flax, wool and silk into a biocompatible polyurethane-based resin.

In contrast to other polyurethane resins, the diisocyanates in the bioresin are locked into a pre-polymer and therefore virtually no vapours are produced, removing the need for fume extraction systems.

’The initial idea was to see how the new fibres reinforce the composite. We are now at a stage where we are testing experimental joint sockets for overall strength using a set of fibres that give the best reinforcing effects,’ says Andrew Campbell, the chemist in the team.

Ensuring the material being used in the new prosthetics is robust and strong is just one part of the puzzle though. ’Not only do you have to make sure they have structural strength and integrity, they have to be biocompatible with the host. This is always the case with any material used for prosthetic applications,’ says Schaschke.

As with prosthetic limbs, biocompatibility is crucial when it comes to synthetic implants. Setting his sights on achieving truly integrated prosthetics is Joachim Storsberg of the Fraunhofer Institute for Applied Polymer Research in Potsdam-Golm, Germany, who was awarded this year’s €20,000 (?16,630) Joseph von Fraunhofer Prize for research with a practical application for developing a synthetic cornea.

For many patients who become blind as a result of illness or an accident, a corneal transplant is the only option. However, cornea donors are rare and with 40,000 people in Europe awaiting a transplant, there are never enough to go round. 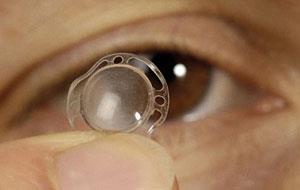 Traditionally, hydrogels have been used as materials for ’artificial eyes’ as they are soft like human tissue, however the difficulty is getting the cells within the eye to take to a hydrogel film. Even if you do manage to get the cells to stick, they could end up growing over the whole implant, rending the implant useless.

Storsberg and his team developed a synthetic corneal prosthesis that attaches to the natural cells in the eye, whilst leaving the optical part of the implant transparent so that the patient can see clearly.

The team took Benz HF1 - a hydrophobic polymer often used in lenses that are implanted into the eye to replace lenses that may have become clouded by cataracts - and activated the edges with plasma. Next, they layered polyelectrolytes onto the surface and covered these with a protein that contains a growth factor to give the surrounding natural cells in the eye a signal to start dividing and proliferating. Thus, the cells of the surrounding tissue grow around the implant, fixing the artificial cornea in position.

In contrast, on the surface of the optical part of the implant, the team placed a monomer that after irradiation, cross-linked to form a hydrophilic polymer film, which prevents cell growth on it, but allows the implant to moisten with tear fluid, so that the eyelid can slide across it without friction.

’You could use this technology in other implants as well,’ Storsberg tells Chemistry World. ’You could use the proteins [used in the synthetic cornea] for cell attachment in artificial bones and joints.’

After testing and further refinement the prosthesis was successfully used in patients from 2009, but the actual surgery to implant the synthetic cornea is quite complicated, explains Storsberg. The surgeon takes a membrane from the patient’s mouth and implants it under the eyelid a week before the operation, he says. ’In the main surgery he will take out the old cornea, put in the new one and then cover it with the membrane from under the eyelid. This tissue will grow very fast in contact with the prosthesis and after a week the implant will be stable in the eye with a very tight fit and high success rate,’ he says.

Integrating prosthetics so they become truly part of the body is a key challenge facing biomaterial researchers, but arguably the ultimate dream would be to be able to develop a fully functioning synthetic nervous system that would enable patients to feel what they are touching with artificial limbs.

Conductive wires might seem a logical starting point for a synthetic nervous system, but there are a couple of major obstacles to their use. The first is that one wire cannot come into contact with another as their signals could intercommunicate and confuse the brain. Another issue is that there are approximately 17 000 tactile receptors in the hand alone - mimicking this using traditional conductive wires made from metals would create an enormous weight for a person to carry around, making it impractical. 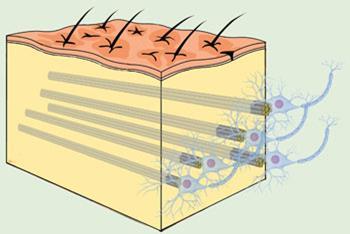 Researchers in the US, however, say they could be on the way to overcoming these problems, using thousands of carbon nanotube fibres, separately encased and insulated in glass, as artificial neural bundles.

The team at Oak Ridge National Laboratory in Tennessee started with glass tubes containing carbon nanotube powder. After several cycles in which the glass tubes are heated and drawn into thinner strands, the fibres become just four times thicker than a human hair and contain 19,600 sub-micron channels each filled with conducting carbon. Each carbon nanotube-containing ’nerve’ is electrically insulated from its neighbours by the glass and can be used as an individual communication channel.

’It’s really fascinating,’ says Ilia Ivanov, one of the team of researchers. ’It paves the way to actually connecting artificial sensors to existing neurosystems.’

’The benefit of carbon nanomaterials is the fact that not only are they biocompatible and could be linked to neurons directly, but that they can also be designed in a sensory form such that they can have a temperature and pressure sensor built in,’ he adds.

In 15 to 20 years’ time, Ivanov believes the glass encased fibres could be protected inside plastic and form part of an artificial skin covering prosthetic limbs, which could then be connected to the host’s existing nervous system. But he concludes, ’we are still working on the individual pieces of the puzzle at the moment.’

The amount of research time invested in developing materials for biomedical applications is huge. Each new advance in biomaterial technology is another piece of the puzzle, bringing the concept of the bionic body closer, where damaged limbs, tissue or nerves can be replaced by artificial alternatives. The wooden legs and leather straps of the past have been firmly cast aside, and in their place stands a new generation of high tech, high performance materials based on cutting edge 21st century science.