A cheap paper test to quickly determine blood type has been developed by researchers in Australia. The simple process could be of great use in developing countries, where the resources to undertake more sophisticated tests may be scarce.

Identifying the blood type of a patient is crucial in medical emergencies, as giving blood of the wrong type can be very dangerous. The new test covers the main blood types, A, B, AB and O - and also determines whether they are Rhesus (D) positive or negative.

’Our technique prints a microfluidic circuit containing the three antibodies (A, B and D) directly onto paper,’ says Gil Garnier, who led the research at Monash University in Melbourne. Blood samples can be added directly to the paper - and as the blood spreads out, the cells will either remain the same or agglutinate (clump together) as they react to the antibodies. 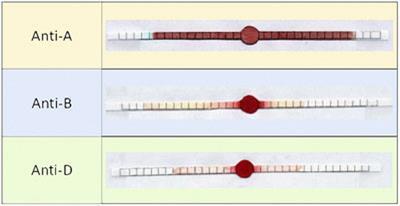 B+ blood agglutinates, and will not spread on paper in the presence of B and Rhesus antibodies

If the cells agglutinate, the blood will separate out into clear serum - a tell-tale signal that can be observed in a matter of minutes. After testing against the different types of antibody, the blood type can be identified.

’The tests are simple enough to make with a modified desktop ink-jet printer, and if commercialised, the cost could be only a few cents per test,’ Garnier adds. ’The next step is to build a full test for transfusion compatibility and also to adapt the concept for other antibody-antigen applications.’

Since the test does not require electricity (unlike conventional tube-based methods that use a centrifuge) there is great potential for use in the developing world. However, some experts note that areas without electricity may also not have the facilities to collect and store blood for transfusions.

A more promising area may be quick on-the-spot tests, and Marilyn Telen, chief of haematology at Duke University Medical Center in North Carolina, US, agrees that sensitivity to more minor blood groups would improve prospects. ’Current efforts to improve blood crossmatching in third world countries focus on moving beyond ABO and Rhesus as well as improving sensitivity,’ she says.