Nicotine residues on indoor surfaces can react with ambient gases to generate cancer-causing compounds, researchers in the US have found

Nicotine residues on indoor surfaces can react with ambient gases to generate cancer-causing compounds, researchers in the US have found. The research is hoped to shed new light on the possible danger of ’third-hand smoke’ - where toxins from tobacco fumes can linger on household surfaces.

’Certain compounds - such as ambient nitrous acid or nitrogen dioxide - are present in higher quantities indoors rather than outdoors,’ explains Hugo Destaillats, who led the research at Lawrence Berkeley National Laboratory in California, US. This is because they are generated by combustion from indoor gas supplies, fireplaces or the use of electronic equipment.

Destaillats and his team used cellulose as a model indoor material, and placed a block of it inside a truck belonging to a smoker for three days. They then analysed the block and compared the results with lab-based tests based on cellulose exposed to vaporised nicotine in a tubular-flow reactor. ’We found that ambient gases [in the truck] reacted with residual nicotine to generate tobacco-specific nitrosamines that are known to be carcinogenic.’ 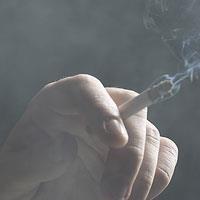 Two of the compounds - N-nitroso nornicotine (NNN) and 4-(methylnitrosamino)-1-(3-pyridil)-1-butanone (NNK) are also found in tobacco smoke, so have been well-studied in the past. But a third compound was identified that is not usually present in tobacco smoke: 1-(N-methyl-N-nitrosamino)-1-(3-pyridinyl)-4-butanal), termed NNA. Since it is absent from smoke, NNA has not been investigated in detail, but the team is hopeful that toxicologists will now undertake studies.

Unlike second-hand smoke, inhaled unintentionally in public places, the hazards of third-hand smoke are not so clear-cut. Many factors are involved, from size and ventilation of the indoor environment to the different materials used - microlayers of toxins can accumulate in upholstery, wallpaper, clothing and hair.

’One group that is particularly at risk from this type of smoke are children,’ says Jonathan Winickoff, an assistant professor of paediatrics who has studied the danger of third-hand smoke at Harvard Medical School. ’Children interact with their environment in a very different way, so their exposure could be twenty times higher than adults.’

’I think this is important work that will set the stage for many further studies on residual tobacco smoke contamination,’ Winickoff adds. ’The implication of third-hand smoke is that there is no way for a person to smoke indoors without contaminating that environment.’