Researchers have shown that a molecular capsule with flexible pores can admit over-size guest molecules.

Chemists in Israel, Germany, and Spain have demonstrated that a molecular capsule with flexible pores can open up to allow molecules that are larger than the normal pore width to enter.1

Although assembled from inorganic building blocks, such capsules can mimic certain aspects of living cells, the researchers say.

The work builds on previous efforts and ideas of co-author Achim M?ller and his team at the University of Bielefeld, Germany. M?ller has pioneered the use of molybdenum oxide building blocks that can be designed to self-assemble into large molecular constructs of various shapes.

Ira Weinstock and his team at the Ben Gurion University at Beer Sheva, Israel, have investigated a hollow capsule that was first synthesized in Bielefeld by linking up 12 pentagonal molybdate building blocks with 30 spacer units made of two molybdenum centres.2 The resulting structure has 20 identical pores, each surrounded by a ring of nine molybdenum atoms, alternating with nine oxygen atoms.

Using NMR spectroscopy, the researchers tested how fast, if at all, a number of different carboxylic acids, ranging from the small acetic acid to the bulky benzoic acid, could enter the capsule. As expected, they found that the smallest molecule is able to enter very rapidly, while the largest remains outside. They were surprised to find, however, that the branched and bulky 1,1,1-trimethylacetic acid, with molecular dimensions larger than the pore diameter, can slowly make its way into the capsule. Detailed experimental investigations carried out at Beer Sheva suggest that the intrinsic flexibility of the pores is responsible for this unexpected entry of bulky molecules. 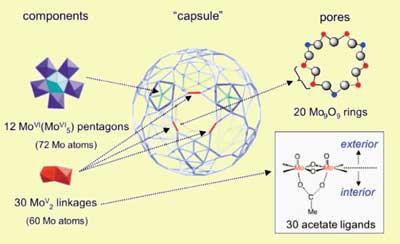 Experts in the field are impressed with the new findings. Lee Cronin, who studies nanostructures at the University of Glasgow told Chemistry World: ’This work is exceptionally interesting. The fact that large molecules can traverse the pores is really exciting since it shows how dynamic this class of nanomolecular containers are, even despite the fact they are made from ’rigid’ oxide building blocks.’

Craig Hill from the Emory University at Atlanta, Georgia, US, echoed Cronin’s sentiment.’This work is significant because these investigators have used four independent arguments that collectively provide compelling evidence that substrate transport through smaller pores does indeed take place without structural disruption of the pore structure itself,’ he said.

One potential application that has been mooted for similar nanocapsules is that of a nanoscopic test tube, to conduct single molecule reactions in a small volume separated from the bulk solution. Pierre Gouzerh at the Universit? Pierre et Marie Curie at Paris commented that the observed flexibility of the pores of this capsule ’opens attractive perpectives in the use of these capsules as nanoreactors.’