Capturing the potential of carbon dioxide 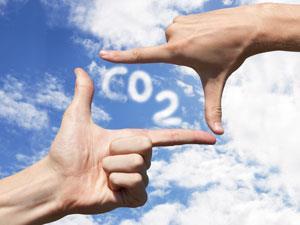 Carbon dioxide is a problem. As a greenhouse gas it contributes towards global warming, and its ever-growing concentrations in the atmosphere are cited as a cause of anthropogenic climate change. But now a team of researchers from the University of Bath have opened up the idea of using carbon dioxide as a useful potential feedstock; a useful chemical resource rather than a troublesome waste product.

Davide Mattia, who leads the research team, has taken inspiration from the well-known Fischer-Tropsh process, which uses an iron catalyst to react hydrogen with carbon monoxide, producing a mixture of alkanes that can be used as fuel. Mattia’s catalyst, which works with both carbon monoxide and carbon dioxide, is also iron based, taking the form of iron nanoparticles embedded on carbon nanotubes. It has a rather unique method of preparation, which is not only simpler to carry out, but results in a more effective catalyst.

Mattia found that when carbon dioxide and hydrogen were allowed to flow over their catalyst, the hydrogen absorbed preferentially onto the carbon nanotubes. When the carbon dioxide reached the iron nanoparticles and reacted, the surrounding high concentration of hydrogen increased the efficiency of hydrocarbon formation. 55% of the reaction mixture was converted to hydrocarbon with the rest becoming carbon monoxide. Roughly half of these hydrocarbons were C2-4 molecules.

Mark Keane, an expert in catalyst development from Heriot-Watt University, comments that ‘current carbon capture and storage solutions, based on solvent absorption and geological storage, can only be considered a short- to mid-term solution. Any study like this one that considers catalytic conversion of carbon dioxide is to be welcomed’. He adds that this catalyst needs testing against a conventional standard to show its full potential.

Looking to the future Mattia and his team envisage trying to use waste heat from the flue gas in power plants to run their process, with the aim of making it carbon neutral.