UK scientists have developed a cheap way of cleaning tarnished metals in industry to prevent corrosion using a UV activated photocatalyst ink. The dirty surface can then simply be washed away with water.

Stainless steel corrosion in industry costs the UK around 4 per cent of gross national product each year. The corrosion is caused by a build up of metal oxides on the metals’ surfaces, which can become contaminated with corrosion products. Currently, aggressive chemicals such as strong acids and chelating agents are used to remove the oxides.

Andrew Mills and David Hazafy from Queen’s University, Belfast, have made anatase titania (TiO2) films to apply to the metal surfaces to clean them. The team was initially interested in titania’s ability to drive ’useful photo-reduction reactions’, says Mills. It was while preparing TiO2 photocatalyst films on stainless steel as part of a water-splitting photo diode project that they noticed that the appearance of tarnish was diminished.

TiO2 is a well known photocatalyst used in the redox reductions of metal oxides. When it is exposed to ultraviolet light, conduction band electrons and valence band holes are produced. The electrons and holes can either recombine or move to the surface of the film where they undergo redox reactions with adsorbed chemical species. But, on introduction of an electron donor, such as ethanol, the donor reacts with the holes, leaving the electrons free to react with metal oxides. 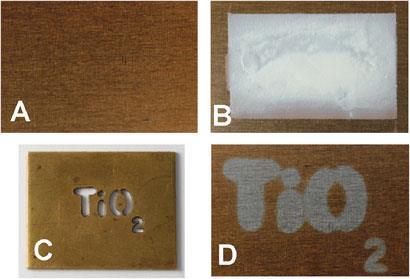 A stainless steel sample without (A) and with (B) the ink on its surface. (C): irradiation of sample B with UV light through a brass TiO2 template. (D): washing off the ink using water. The bronze coloured oxide coating has been removed by the illuminated section of the ink

The team tested their method by coating a TiO2 gel film onto stainless steel. They heated the sample to 450oC, which resulted in a bronze-coloured metal oxide coating, mainly Fe2O3. They immersed the sample in an ethanol-water mixture in an oxygen-free environment. When they shone a UV light onto it, they found that the bronze colouration disappeared rapidly.

With the gel films, an oxygen-free environment is necessary because oxygen in the atmosphere competes with the metal oxides for photogenerated electrons. Annealing at 450oC is also necessary to seal the film onto the metal’s surface. Getting an oxygen-free environment is not practical in an industrial setting, so Mills and Hazafy came up with a TiO2-based ink that sets as a dry film, resulting in a higher surface area than the gel, which improves the degree of contact between the photocatalyst and the metal oxide. They made the ink by mixing TiO2 powder and electron donor glycerol with hydroxyethyl cellulose, which binds the components. After irradiation with UV light, the oxide layer was removed with water to reveal the bright metal surface underneath. ’This is particularly useful for stainless steel pipework in the nuclear industry,’ says Mills.

Peter Robertson, an expert in photocatalysis at Robert Gordon University, UK, describes the research as ’a significant breakthrough with longer term commercial potential’ and that it ’represents the next significant application of semiconductor photocatalysis’.