Fluorescent nanodiamonds can now be made 100 times more cheaply than before, thanks to work by chemists in Taiwan. The new process should provide easier access to the tiny diamonds, which could have future applications in medical imaging and cancer therapy.

Nanodiamonds are made by detonating two explosive compounds, TNT and RDX, and then collecting the resulting soot - which contains diamonds approximately 4nm in size. But to make the diamonds fluoresce they have to be exposed to a high-energy electron beam from a van de Graaff accelerator, then heated to 800?C - a costly procedure. 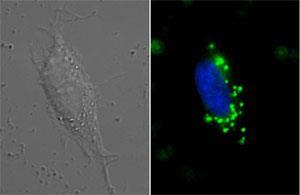 Instead, the Taiwanese researchers used a purpose-built machine to bombard nanodiamonds with high-energy helium ions. This causes defects to form in the structure of the diamonds so that they fluoresce when they are hit by laser light.

’Our high-fluence medium-energy (40 keV) helium ion beam can be operated safely and routinely in ordinary laboratories,’ says Huan-Cheng Chang, who led the team with Wunshain Fann at the National Taiwan University. The team have already started selling their nanodiamonds - charging around ?150 for 10mg - a hundredth of the cost of those made by conventional methods.

In the same way that quantum dots or fluorescent beads are used to illuminate tumours, the researchers envisage that nanodiamonds could be connected to tumour-seeking drugs or antibodies to function as beacons.

’Carbon-based nanodiamonds possess several properties that make them very amenable to biological studies,’ says Dean Ho at Northwestern University, Illinois, who was the first to show that nanodiamond clusters could be used to deliver chemotherapy drugs to cancer cells. ’They are soluble in water and have very good biocompatibility: they cause very little inflammation in the body.’

’But work still needs be done to evaluate toxicity and clearance time - how long the diamonds remain in the body - before clinical trials can begin,’ Ho told Chemistry World.

Lidija Siller of the Nanoscale Science and Nanotechnology Group at Newcastle University, UK, says that other luminous nanoparticles available for biological applications are more toxic to cells. ’This work represents a step forward in fluorescent nanodiamond production and should stimulate research to further improve separation, size selection, mass production and applications of this material.’