A vital piece of nanoelectronic circuitry has been produced which could bring molecular computers a step closer. Teams of scientists, led by James Heath and Fraser Stoddart from Caltech, Pasadena and the University of California in Los Angeles respectively, have made a molecular electronic device that mimics dynamic random access memory (DRAM) circuits on today’s computer microchips. The device is the size of a human white blood cell - dimensions that its solid-state equivalent are not expected to attain before the year 2020.

There is a limit to how small and how many integrated circuits can be fabricated and packed onto a silicon chip, which the ultimate miniaturisation of molecular electronics could overcome. This uses individual molecules to make nanoscopic analogues of electronic components in integrated circuits. For example, molecular switches can mimic the operations performed by logic gates in memory circuits. One such group of molecules are the [2]rotaxanes.

These consist of two components: a long dumbbell-shaped molecule ’threaded’ with a large ring-shaped molecule that is trapped so that it can only move back and forth along the dumbbell’s axis.

The California team’s [2]rotaxane (see picture) has a positively-charged ring which can sit at one of two different sites on the dumbell’s axis, representing the ’zero’ or ’one’ of the binary system our computers use to store data. The ring normally sticks to a tetrathiafulvalene (TTF) group, which represents a low conductance state, or ’zero’. But oxidising the TTF group gives it a positive charge, repelling the ring to the alternative site. This represents a high conductance ’one’ state.

In order to construct a working molecular DRAM, the California team used a monolayer of two-state [2]rotaxanes sandwiched between 400 silicon and 400 titanium nanowires arranged in a crosshatched pattern. A single bit of data can be stored at the point where a silicon and titanium nanowire cross each other, trapping about 100 [2]rotaxane molecules between them.

That means that the complete electronic memory circuit contained 160,000 bits at a density of 1011 bits cm-2. A single bit is only 15 nanometres wide, or about one ten-thousandth the diameter of a human hair. By contrast, the most dense memory devices currently available are approximately 140 nanometres in width. ’Whether it’s actually possible to get this new memory circuit into a laptop, I don’t know,’ admits Heath. ’But we have time.’

David Leigh, who works with rotaxanes at Edinburgh University, UK, called the work ’a superb technical achievement’. Although the molecular DRAM suffers from many circuit defects, each bit operates independently so the viable ones can be identified and used in a memory device. ’The development of defect-tolerant computer architectures by Heath, along with Stanley Williams at Hewlett-Packard in the 1990s, offers a clever means of overcoming the ’mistakes’ that the current, rather crude, reaction ion etching process and self-assembly methods of monolayer production introduce for organic molecular structures,’ said Leigh. 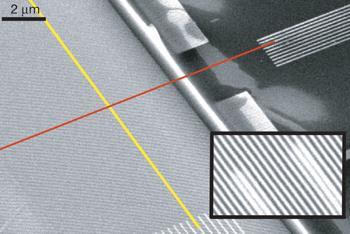 Each intersection of the crosshatched wires forms a single ’bit’

’The latest rotaxane-based memory from Heath and Stoddart exploits this brilliantly delivering an amazing organic-based 160-kilobit memory that is competitive with the smallest memories produced by photolithography,’ he adds. ’Surely this sort of integration of sophisticated organics with silicon is going to be the future?’