Danube environmental survey is 'biggest river expedition of its kind'

An international team assembled to test environmental pollution and water quality in the River Danube are due to arrive in Vienna today. But while most visitors to the historic Central European city will be spending the night in comfort on dry land, 18 scientists of the Joint Danube Survey 2 (JSD2) will be sleeping in bunks aboard the Hungarian ice breaker Sz?ch?ny.

Carmen Hamchevici, a chemist at Romania’s Research and Development Institute for Environmental Protection (ICIM), says scientists will spend every night on ships during the research expedition, which began on 14 August at Regensburg, Germany. The trip is scheduled to end some 2375 kilometres later at the end of September, in the Danube delta at the Black Sea.

Speaking to Chemistry World from the Serbian ship Argus, which houses the JSD2 laboratory, Hamchevici explained: ’We have a lot to do and we have to move fast, starting some days at 6 am and maybe not done until midnight. Under these conditions, we cannot afford to waste time booking into hotels.’

’JSD2 is really something special,’ explained Jaroslav Slobodn?k, an environmental chemist who is technical coordinator of JSD2. ’It is the biggest river expedition of its kind ever in the world.’ 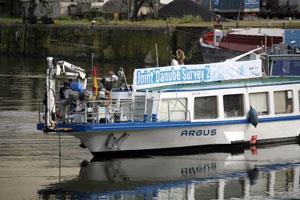 The goal of the survey is to provide sound water quality data to measure progress in cleaning up pollution in the river by 2015 to meet EU guidelines. Since the Danube touches 10 nations concerned about its water quality, the project is necessarily international. ’This is a unique opportunity to come into contact with so many scientists from so many different countries,’ said Hamchevici.

Slobodn?k, who also coordinated JSD1 in 2001, said JSD2 will cost

1.1 million and is a much more detailed survey than the first. Parameters being tested include toxic pesticides, pharmaceutical drugs, heavy metals and bacteria. In addition to chemists, participating scientists include fish experts, based on a third ship provided by the European Union Joint Research Centre. 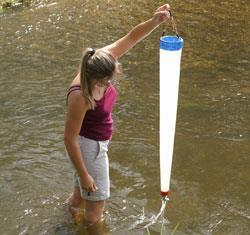 Christina Kaiblinger, a biologist-phytoplankton expert from Austria, samples the Danube

The chemists are able to do basic photometric testing in the ship’s laboratory, but most of the on-board work involves preparing samples for shipment to land-based labs, Hamchevici said. ’But it is equipped with everything we need,’ she added. ’All of us brought the equipment - down to the last pencil - that we need to fulfil the job.’

Some sediment samples can be stored frozen or in formaldehyde on the Argus and delivered to laboratories at the end of the expedition, but water samples need to be delivered to participating laboratories within three or four days. Most are within a day’s drive from the Danube, while some samples bound for labs in Germany and Italy are shipped by commercial express delivery service.

Slobodn?k, who is executive director of the consulting firm Environmental Institute in Kos, Slovak Republic, added that the survey results should be available by summer 2008.

Interested? Spread the word using ’tools’ menu on the left.