The Year of the Dragon might be considered the luckiest of the Chinese Zodiac, but so far 2012 has been rather unlucky - at least for the people relying on water from two rivers in China.

In January, Chinese state news agency Xinhua  reported that Cadmium pollutants had been released into the Longjiang River in the southern region of Guangxi. Twenty tonnes of cadmium was released, according to Xu Zhencheng, head of the expert panel Ministry of Environmental Protection (MEP) clean up task force.

Ten people were arrested on 15 February over the industrial waste discharge, all shareholders or executives of two companies: Guangxi Jinhe Mining Co and Jinchengjiang Hongquan Lithopone Material Corporation, in Hechi city. The local authority, the procuratorate of Guangxi, believes that the two companies should be held responsible for the polluting accident. 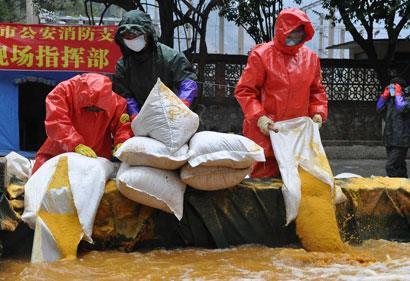 Aluminium chloride has been used to neutralise the cadmium

Not long after the Longjiang cadmium spill, another water pollution scare emerged in Zhenjiang, Jiangsu province. A leak of phenol in the Yangtze River, China’s longest waterway, from a cargo ship from South Korea threatened the water supply of 3 million people in the city.

Aizhong Ding at Beijing Normal University has looked at the 709 environmental accidents reported to the MEP from 2004 to 2009 and found that 49% of these accidents occurred in surface water, including rivers and lakes. The three provinces with the largest numbers of accidents rated ’extreme risk’ are Guangdong, Zhejiang and Jiangsu, the most industrialised regions in China. The majority of pollutants were organic compounds.

In 2011, 48% of environmental accidents were triggered by mishaps in the production process and 14% by traffic accidents.

’The risk of environmental accidents is accumulating with the increase in the total amount of pollution,’ Ding tells Chemistry World. ’At the same time, these accidents are becoming more and more widely known in China.’

Jun Ma, director of the Institute of Public and Environmental Affairs (IPE), a non-profit organisation based in Beijing, and colleagues have developed water pollution databases to monitor corporate environmental performance and to facilitate public participation in environmental governance from 2006. ’Some heavy pollution industries, such as the heavy chemical industry and the mining and metal industry particularly, are developed amid the country’s rapid industrialisation and urbanisation. But strict regulation is lacking,’ Ma says. ’Big and small plants emerge in large numbers everywhere. There is no such thing as national water function zoning.’

Policy response
Almost at the same time as the Longjiang and Zhenjiang problems, the central government launched new policies to deal with increasing numbers of environmental accidents.

On 6 February, the National Important Rivers and Lakes of Water Function Zoning (2011-2030) national policy document was released by the Ministry of Water Resources of China, having been approved by the State Council in December of last year. China will divide its major rivers and lakes into 4500 water functional areas, and carry out differentiated protection and management of different water areas, according to this division plan.

The document followed the Opinions of the State Council on Implementing the Strictest Water Resources Management System released on 12 January.

Poor regulation
Although the Chinese central government hopes to ease the pressure of water pollution accidents, the implementation of its policies has an uncertain future.

’The intentions of policy makers are inconsistent with the interests of local governments, who are eager to develop their local economies,’ Ding says ’In many cases, local governments are willing to give green lights to heavily polluting industries for local GDP growth. Both the central government and the local governments should address the question: "In what way is it appropriate for China to develop?"’

’Environmental regulations are poor in China,’ and weak, if not failed, environmental legal enforcement leads to ’high cost on law keeping and low on breaking’, Ma says. ’Many environmental decisions are reduced to mere formality.’ All this attracts more heavily polluting industries into China. ’Our environmental capacity is limited. We just cannot bear so much environmental damage.’