Chinese scientists have found concentrations of polycyclic aromatic hydrocarbons (PAHs) in some Chinese cities to be among the highest in the world. 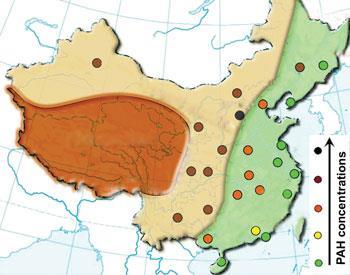 Pollution levels were greatest in areas with colder winters

PAHs are formed from the incomplete burning of fossil fuels and the International Agency for Research in Cancer has classified them as probable human carcinogens.

As China is the world’s most populous country and largest consumer of coal, and the number of vehicles on its roads is growing along with its economy, Gan Zhang and co-workers set out to conduct a large-scale study of PAH levels across the whole of China, comparing 36 cities (and three rural locations) in all four seasons of 2005. The team, based mainly at Guangzhou Institute of Geochemistry, operated by the Chinese Academy of Sciences, found that levels were greatest in cities on higher ground (in north and north-west China), which had colder winters and burnt more coal.

Ian Colbeck, director of the Centre for Environment and Society at the University of Essex, UK, said Zhang’s study was ’another example of the adverse impact on the environment as a result of China’s drive to increase industrial output’. ’The health implications of the high concentrations of PAHs in the densely populated Chinese cities are very significant,’ he added. Ian Gray