Science policy researchers were encouraged by Chinese premier Wen Jiabao’s strong support for science innovation and investment in research, which he expressed in an interview published on 17 October in the journal Science.1 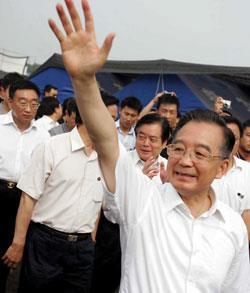 In the interview, Wen admitted that it is easy to neglect support for basic (’blue skies’) research - whose current budget is 5 per cent of total research investment. ’[Neglecting basic research] should be avoided,’ he said. ’In recent years, we have continuously increased the level of support, but I think the [investment] ratio is still insufficient,’ he added. Zeng Guoping, a senior science policy researcher at Tsinghua University, interprets Wen’s words as meaning that there may be a further increase in basic research funding. ’This increase is a must for original innovation,’ Zeng told Chemistry World.

Wen also welcomed a Science  paper by Chinese scientists showing how GM cotton has reduced pesticide use not only for the cotton but also for neighbouring crops.2 ’I strongly advocate making great efforts to pursue transgenic engineering. The recent food shortages around the world have further strengthened my belief [in developing such technologies],’ Wen told Bruce Alberts, Science’s editor-in-chief.

Indeed, Chinese policymakers have already shown their support for GM technologies in more than words - in July they approved a major GM research programme reportedly worth US$3.5 billion.

The Chinese premier spoke of his attempts to create a more innovative system. He is keen to cultivate home grown innovative talent, starting by encouraging independent thinking in school children, he revealed. Wen also promised that China will create a ’good environment’ for scientists from the outside the country to work in, recognising that ’this will require us to protect their independent creative spirits and intellectual property rights’.

In a Science  editorial on 31 October, Wen continued: ’The future of China’s science and technology depends fundamentally on how we attract, train, and use young scientific talents today’.3

’Recently, there have been complaints that many returning Chinese scientists have had foreign citizenship,’ says science policy researcher Liu Li, from Tsinghua University. ’However, from what Wen said, we might expect that problems like citizenship will not impede China’s policies to pursue talent,’ Liu told Chemistry World.

Alberts questioned whether scientists could help to build new diplomatic bridges to North Korea and ’help the cause of world peace’. ’I believe that’s entirely possible,’ answered Wen. ’More scientific language and less diplomatic rhetoric may make this world even better,’ he added.