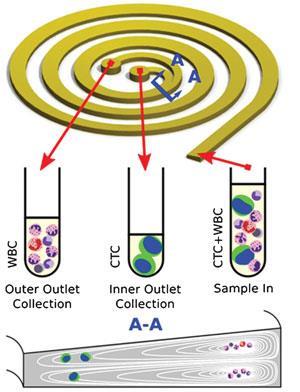 Repeated biopsies of tumours can be a painful and distressing procedure for cancer patients. Anew biochip developed by researchers in Singapore can isolate tumour cells from blood samples, and may one day be an alternative to more invasive methods for tracking later stage cancers.

Deaths from cancer generally occur after the cancer has spread. Cells detach from the primary tumour and travel through the blood, subsequently forming new tumours. Being able to isolate and characterise these circulating tumour cells (CTCs) can provide information about the original tumour. However, CTCs exist in very low numbers in the blood stream and hence require enrichment and separation before analysis.

Many current methods rely on affinity based detection using antibodies targeted against surface proteins but the heterogeneous nature of CTCs means they can express different surface proteins, so only a subpopulation of cells may be captured.

The slanted spiral microfluidic separation device developed by the research group of Chwee Teck Lim at the National University of Singapore exploits the size difference between CTCs and normal cells. Inside the device, the blood sample is subjected to the effects of the Dean vortex flow, an inherent feature of curved microchannels, and inertial lift forces. Both forces are a function of particle size, meaning the balance of the forces can be optimised to focus cells of different sizes to distinct lateral positions within the channel, allowing physical separation and isolation of CTCs from white blood cells (WBCs). The trapezoidal cross-section of the device’s channel has been optimised to direct the larger CTCs towards the inner wall. The significance of this design is ‘the speed with which they are able to separate the cells’, says Jeffrey Chalmers, a bioengineer at the Ohio State University in the US. Its rapid separation, processing 7.5ml of blood in under 10 min, is the highest throughput to date and represents a significant improvement over the rate of ~3ml h–1 for its predecessor with a rectangular cross-section, and will allow large-scale processing of clinical samples.

Using this process, the researchers have successfully isolated CTCs from clinical samples of lung and breast cancer patients. The isolated cells are viable, allowing their molecular characterisation, which may lead down many avenues in the future. As Lim explains, it may ‘enable clinicians to continually track the response of patients as they undergo chemotherapy treatment’, or be used to test anticancer drugs and develop individually-tailored treatments.