A supermagnetic particle could reduce heavy metal pollution in blood

With the development of modern industries, heavy metal pollution in humans is on the rise, say researchers in China, who have now designed a supermagnetic nanocomposite to effectively remove one of the pollutants - cadmium ions - from blood.

Cadmium ions damage organs and are carcinogenic. Materials currently being studied to clear them from human blood don’t possess all the required properties for this purpose. They either have good selectivity, high saturation magnetisation or good water dispersibility, but not all three. The new composite, made by Jun Jin and Jiantai Ma from Lanzhou University and colleagues, combines all of these properties.

The team built up the nanocomposite - PAD-PEG-Fe3O4@PEI - from four components. The first was magnetic iron oxide nanoparticles, chosen for their low toxicity. The team coated them with polyethylenimine (PEI), which binds to cadmium ions. The coating also reduces the chances of nanoparticle uptake by red blood cells, maximising their circulation time in the blood. Polyethylene glycol (PEG) was grafted onto this as an anchor for negatively charged 2,2’-(phenylazanediyl) diacetic acid (PAD), which counteracts interactions between the nanoparticles and plasma proteins or white blood cells. 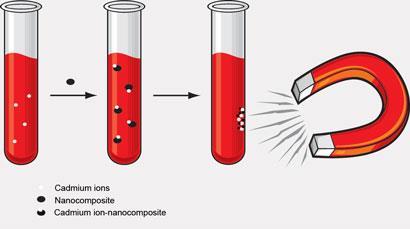 In tests, Jun and Ma’s team removed 80% of cadmium ions at a concentration of 1ppm in a 1ml blood sample using the composite, with good selectivity when compared to other positively charged ions, such as Ca2+ and Zn2+. As the composite is highly supermagnetic, subsequent removal of the nanoparticles is easy.

Jin envisages that the nanocomposites would be injected into a vein, bind to cadmium ions in the blood and be removed by circulating the blood through a magnetic field to attract the magnetic nanocomposite-cadmium ion complexes. The detoxified blood would then be returned to the body.

Removing toxic metal ions such as cadmium ions  from blood and tissues is important, says Mansoor Amiji, an expert in nanomaterials for medical applications at Northeastern University, US. These toxic metal ions bind to proteins in the body, affecting their functions, he adds. However, he points out that using PEI in the composite could be a problem. Not only is PEI toxic to cells, but positively charged PEI can attract any negatively charged ion. He says that future work should show that the ’magnetic nanoparticles can actually work in a biologically relevant system’.