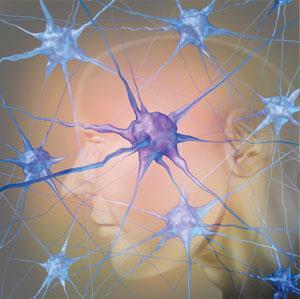 Neuron death is an obvious aspect of neurodegenerative disease but a complex puzzle of biological pathways and interactions needs to be teased apart to understand the underlying mechanisms.

Philip Doble, of the University of Technology in Sydney, Australia, and colleagues have unveiled an immune-labelling and imaging mass spectrometry technique to demonstrate the interaction of iron and dopamine in the brain of a Parkinson’s disease (PD) mouse model. They hope their findings may bring researchers closer to understanding and treating this debilitating condition.

PD is caused by the degeneration of dopaminergic neurons in the substantia nigra (SN) region of the brain, causing loss of function, in particular that linked with movement. Iron is known to be present in higher concentrations in the brains of PD patients. ‘We don’t know for certain if this is a cause or consequence of the disease,’ explains Doble, ‘but increasing evidence is pointing to iron playing a major role in the death of dopamine-producing neurons of the SN.’ The interaction of iron and dopamine has been proposed as a neurotoxic mechanism through a redox-couple, which produces free radicals; however, this interaction has proved difficult to study in situ.

By targeting tyrosine hydroxylase (TH), an enzyme involved in dopamine biosynthesis, using a metal-linked immunohistochemical approach, the team successfully quantified the co-localisation of TH and iron in the brain through simultaneous imaging of the two species in a PD model, providing the first direct evidence of this relationship.

A key, and surprising, finding of their work was that the highest levels of iron were not found in the vulnerable SN region and were instead found in regions left untouched by PD; however, the SN showed the highest co-localisation of iron and dopamine, suggesting that iron alone was unlikely to be the sole source of PD-induced damage.

James Duce, who researches neurodegenerative disease at the University of Leeds in the UK, describes the work as a ‘crucial discovery in understanding how this region of the brain has a higher susceptibility to disease-associated oxidative stress.’

Doble and his team, including David Finkelstein and Dominic Hare from the University of Melbourne, are now investigating the role of iron in PD in more detail, with the aim of designing intervention strategies that can prevent cell death in the SN. However, as Doble says, this is not an easy task as ‘iron itself plays multiple roles in the cell.’

With metal–protein interactions being implicated in many other neurodegenerative diseases, the ability to visualise the interaction between metals and proteins is an exciting advance in the field and one that may be of wide benefit in the future.