Carbon dioxide enhances the catalytic oxidation of cyclic alkenes, leading to higher conversions at low pressures, say researchers from South Korea. The system could be a step towards new technology for using CO2 at low pressures.

Sang-Eon Park and coworkers from Inha University, Incheon, prepared carbon nitrides that contain surface groups to activate the CO2, which was then used to promote the oxidation reactions of several cyclic alkenes.

CO2 is being recognised as an alternative and economic resource for use in organic reactions and it has been used in catalytic reactions, either as a solvent or a reagent. However, in most cases, it is used in a dense phase or under supercritical conditions, which require high operating pressures and have low reaction rates. 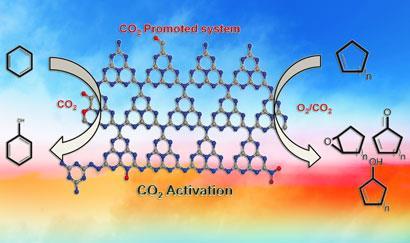 The team tested their system by oxidising different cyclic alkenes with various amounts of oxygen, with and without CO2,  and compared the results. They found that the presence of the CO2 increased the conversion percentage in all cases. The CO2 acts as an oxygen source, which is inferred from the formation of carbon monoxide and surface carbamate. The team was also able to reuse the catalyst up to three times.

Chang-jun Liu from Tianjin University, China, an expert in catalysis and the use of greenhouse gases, says that using ’high nitrogen containing carbon nitrides to enhance the oxidation of cyclic olefins with CO2 as a soft oxidant’ is significant. Liu adds that the work could lead to an easy approach for CO2 conversion with the production of highly-valued chemicals.

Park’s team now hopes to fully understand the reaction mechanism, explaining that this will help them to design a more appropriate catalyst. ’Further spectroscopic and computational studies are in progress and hopefully, very soon, a complete insight over promotional aspects will be revealed,’ concludes Park.