Researchers are working out how to decommission aging rockets

US developers say they are close to a breakthrough in efforts to clean up post-cold-war missiles. The new approach, which is renewable and would cut costs by more than half, would be a significant improvement on what is currently available, they claim.

It is a long time since the peak of the cold war. In the 1960’s 1000’s of intercontinental ballistic missiles (ICBMs) such as the Minuteman in the US were poised ready to fire. By 1989, it was clear that this particular war between the world’s superpowers was coming to a close. Negotiation were started to reduce the number of missiles. On 31 July, 1991, the Strategic Arms Reduction Treaty (Start) was signed and efforts were initiated to deactivate the ICBM’s. Currently, ICBMs are deactivated using a jet of water ’to grind out the explosive materials,’ explained Edward Coppola, principle engineer with Applied Research Associates, speaking at the American Institute of Chemical Engineers (AIChE) annual meeting in San Francisco, California. 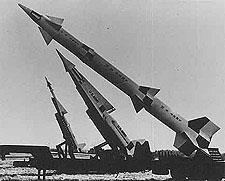 Due for a clean up

The water deactivates the ammonium perchlorate oxidizer used in the solid propellant. This approach has been used for many years - and not only for the continuing arms reduction efforts around the world. Even missiles that are not going to be deactivated cannot simply be left in place. ’The energetic materials have a shelf life of about 15-20 years, but the casings and electronics will last much longer,’ explained Coppola. The army simply washes out and reuses the rockets.

But, even though it is no longer going to trigger an explosion the perchlorate is far from safe. It blocks uptake of iodine by the thyroid gland and can hinder the development of foetuses and young children. This environmentally persistent and highly water soluble compound now contaminates the drinking water of tens of millions of people in California (where several missile testing and manufacturing sites are located) and other parts of the US. The California legislature has acted, requiring remediation at heavily contaminated sites and improved drinking water treatment.

’There are now about 33 facilities treating for perchlorate at low levels in California,’ explained Coppola. These facilities clean drinking water using single-use ion exchange resins. Once the resin is exhausted it is thrown away. ’This would be expensive for remediation, where a significantly larger amount of resin would be needed,’ said Coppola. The Applied Research Associates website quotes costs from $200 (?103) to more than $500 per acre-foot (1233 cubic meters). Coppola was at the AIChE meeting to report the success of an alternative approach using a weak-base resin. Once the new resin is exhausted it can be regenerated using sodium hydroxide and reused. ’We have a patent pending on this new approach, and we have recently completed a successful field demonstration at the Redstone Arsenal in Alabama,’ said Coppola. The company expects the resin to reduce the cost of remediation of highly contaminated areas to less than $100 per acre-foot.