New compounds to fight the herpes simplex virus (HSV-1), which causes cold sores, have been made by researchers from Italy. The compounds’ antiviral activity could be enhanced further by encapsulating them in a cyclodextrin nanocarrier that acts as a delivery system.

Giovanni Grassi and colleagues from the University of Messina made indole-3,4-diones that share structural features with inhibitors of kinase - an enzyme linked to many diseases. The inhibitors were recently reported to prevent viral replication in vitro. ’The diones showed remarkable anti HSV-1 activity in vitro,’ says Grassi. They then encapsulated the most effective dione in an amphiphilic - both hydrophilic and lipophilic - cyclodextrin. These nanocarriers increased the ability of the antiviral agents to penetrate into target cells.

The herpes simplex virus is a DNA virus that can cause a variety of conditions from cold sores through to life threatening diseases. Some strains of the virus have become resistant to the current treatment, aciclovir, so researchers are searching for new treatments. Grassi says that his compounds are highly soluble in organic solvents and water and ’could overcome the limited solubility in water and limited oral bioavailability of aciclovir.’ 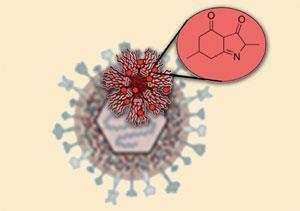 ’Grassi and colleagues have clearly shown that the cyclodextrins have advantages over unmodified cyclodextrins for cell delivery,’ says Raphael Darcy, an expert in cyclodextrins from University College Dublin, Ireland.

’Viral infections are one of the most serious threats to human health,’ says Grassi. ’Compared with the number of drugs available to treat bacterial infections, the number of antiviral drugs is small.’ This is because of the difficulty in obtaining selective toxicity against viruses and the emergence of drug resistant viral mutants.

’Incorporating an antiviral drug in an engineered nanocarrier is a tool to optimise drug distribution in the body, allowing a specific delivery to the target site and limiting undesired effects,’ says Grassi. A future challenge will be to incorporate several bioactive guests into the same nanocarrier. This could lead to therapeutic systems with many functions, he adds, to deliver optimised combinations of conventional drugs for customised medicine.