US chemists have turned carbon dioxide into graphene oxide

Researchers on the hunt for a better way to recycle carbon dioxide have turned it into graphene oxide. Graphene oxide can be easily reduced to graphene but is also useful in its own right for water repellent materials, electrical circuits and medical applications such as drug delivery.

Unfortunately, carbon dioxide is highly stable making it difficult to turn into other useful molecules. Jae Lee of the City College of New York says that while other researchers have forced CO2 molecules together to form graphene oxide using extreme pressures, his team has managed this under relatively mild conditions. Lee and colleagues produced graphene oxide through a two-step process: first, they fixed the CO2 to ammonia borane (NH3BH3) and then they heated the resulting solid to create a honeycomb structure of graphene oxide.

In the first reaction, they placed NH3BH3into a stainless steel cell and then added CO2 until the cell reached a target pressure. They then gradually heated the cell to 100?C over a few hours. At a pressure of about 30atm, the mass of the NH3BH3doubled thank to the addition of carbon dioxide, producing OCH3, HCOO and aliphatic groups. 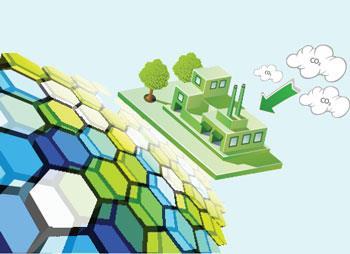 ’This is the first work reporting the formation of aliphatic groups and carbon directly from CO2, without involving catalysts or metal-containing compounds, at moderate conditions,’ says Junshe Zhang, a member of Lee’s group. Lee adds that breaking down CO2 usually requires temperatures of over 400?C and pressures above 690atm, so the moderate conditions imply a lower energy cost than expected for making useful hydrocarbons.

To turn the product of the first reaction into graphene oxide, the team surrounded it with inert gas and heated it to between 600 and 750?C over two to three hours, causing much of the nitrogen and hydrogen to leave the solid as ammonia and other volatile species. Lee says that the well-defined planar structure of the boron oxide served as a template for the 3-6nm thick graphene oxide layers.

’Using small molecule starting materials in a bottom-up approach is attractive because it may lead to a greater degree of control over the nanocomposites’ properties,’ says Dan Dreyer of the University of Texas, US. In particular, he is impressed that the team controllably incorporated boron into graphene oxide, which could help tune its catalytic properties. Lee suggests that boron oxide could improve graphene oxide’s electrocatalytic performance as an oxygen reducer in proton exchange membrane fuel cells.

If the new method can be turned to embedding other elements in graphene oxide, Dreyer says it could prove a powerful tool for optimising the properties of carbon nanomaterials.