A technique used to pinpoint the time at which new species of life evolved has been adapted to date historic prints.

A technique used to pinpoint the time at which new species of life evolved - the molecular clock - has been adapted to date historic prints.

US biologist S Blair Hedges, who studies evolution and astrobiology at Pennsylvania State University, analysed the corrosion of copper plates and decay of wooden blocks in place of differences in DNA sequence.

Hedges analysed several series of Renaissance prints produced at irregular time intervals, including prints of unknown date. He hypothesised that the deterioration of the wood blocks and copper plates in the printing equipment was more likely to be a function of time than a function of the number of print runs. 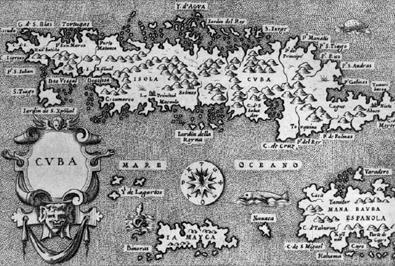 Renaissance copperplate first edition print of a map of Cuba (1572). A print made by the same copperplate from the sixth edition (1620) shows fading caused by deterioration of the plate, not from aging of the print

Cracks in wood blocks interrupt the lines of the resulting print, while corrosion of copper plates (and removal of corroded material by polishing prior to printing) narrows the grooves that hold the ink, leading to thinner printed lines. ’Studies of metal corrosion find that a plate of copper will normally corrode one to two micrometres per year,’ Hedges told Chemistry World. A groove cut by a right-angled wedge-shaped tool (burin), for example, will always be half as deep as it is wide at the surface, thus for every micrometre it loses in depth, it will lose two micrometres in line width.

Hedges compared several historic prints, and found that alterations to both wood blocks and copper plates are a function of time rather than printing events. Interpolating the time points given by dated prints, Hedges derived what he calls the ’print clock,’ allowing him to date prints of unknown age using the detailed analysis of line deterioration. The rate  at which line width decreased matched the typical corrosion rate of copper plates.