Scientists led by Philippe Walterat the Centre for Research and Restoration of the Museums of France used scanning electron microscopy and quantitative   x-ray diffraction to analyse 52 samples of ancient Egyptian cosmetics preserved in the Louvre museum in France. 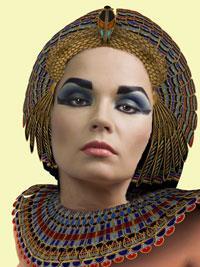 The team found  that the make-up contained a number of lead compounds like galena (PbS), which gave a distinctive glossy black colour, and three white materials: laurionite  (Pb(OH)Cl),  phosgenite (Pb2Cl2CO3) and cerussite (PbCO3). Laurionite and phosgenite didn’t occur naturally in and around Egypt, but ancient recipes showed that laurionite was synthesised by painstaking procedures, of which phosgenite was a by-product. Obviously the Egyptians put in much effort to produce these materials, but why?

Walter’s group collaborated with Christian Amatore’s team at the ?cole Normale Sup?rieure in France,  experts in electrochemical measurements, to solve the mystery.

Amatore says that although most lead compounds, like galena, are insoluble, compounds like laurionite ’can dissolve a little bit to produce Pb2+.’ In terms of charge, radius, and number of water coordinates, Pb2+ is similar to Ca2+. Ca2+  stimulates enzymatic systems that help trigger the body’s immune defences - the investigators wondered if Pb2+ did the same.

The investigators placed platinum-coated carbon-fibre ultramicroelectrodes very close to skin cells in culture. ’In the thin gap between the electrode and the cell, when very small amounts of chemicals are emitted by the cell, they can be detected by the electrode as a current,’ explains Amatore. As soon as the skin cells were exposed to Pb2+, the team’s instruments showed that they began to give off NO - a molecule known to stimulate immune defences.

Jonathan Sweedler, an expert in neurochemistry at University of Illinois at Urbana-Champaign, US, explains that there are several ways to measure NO release and ’electrochemistry is certainly a valid way to make those measurements.’ Walter and Amatore’s work is ’one of the more clever applications of looking at NO release,’ he says.

Amatore says it’s interesting to note how the ancient Egyptians understood the chemical nuances of lead. Documents of that time clearly discussed how lead shouldn’t be ingested but only applied to the skin. Amatore explains when ingested, stomach acid turns lead into Pb(IV), which is toxic, but the Pb2+ generated on the skin has a protective effect.