Delving deeper in the Hall of the Kings

A portable and non-invasive technique to study and characterise pigments in ancient architecture has been used by scientists in Spain to study the vaults of the Hall of the Kings in the Palace of the Lions in the Alhambra, Spain.

The palace was built and decorated during the Nasrid period in the 13–15th centuries, the last of the Moorish dynasties in Spain. After being taken over and adapted during the first period of Christian domination in the 16th century, it was neglected for centuries before restoration began in the 19th century.

In the vaults, recent restoration work by the conservation department of the Council of the Alhambra allowed Maria Jose Ayora-Cañada at the University of Jaen and colleagues to use portable Raman microspectroscopy to identify the colour pigments in the plasterwork. ‘This was a unique opportunity to study these vaults. They are one of the most important expressions of Nasrid art in Europe,’ says Ayora-Cañada.

Raman spectroscopy is used frequently to study art, but away from laboratory conditions it is not straightforward to use. The team set up microspectrometers on platforms 12m high in the vaults. ‘One of our problems was the vibrations that occur when measurements are carried out on top of scaffolding,’ says Ayora-Cañada. Another was the lack of space to position the probe because of the roof structure. However, the team succeeded in obtaining good spectra with short acquisition times. They used a fibre-optic probe attached to a video-microscope with integrated camera and LED illuminator to allow precision spot sampling. To prevent interference from outside light, they used a higher magnification objective (x20), which gives a shorter working distance. 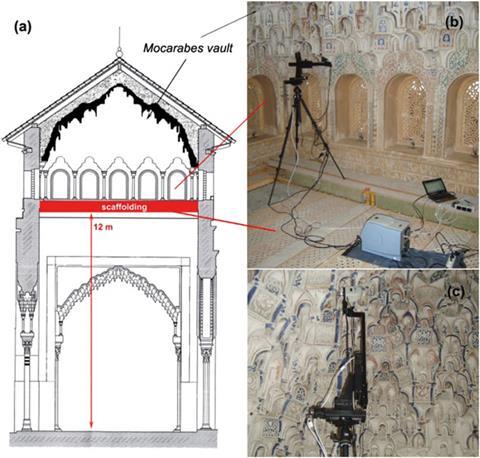 During the investigation, the team found that red areas were painted with cinnabar (HgS) and minium (Pb3O4). ‘The position of the cinnabar indicated that the pigment was originally used by Nasrid artists, although it was also used in restorations. Minium seems to have been employed only in repaintings,’ says Ayora-Cañada. They also identified the degradation products that both red pigments were forming – anglesite and calomel. A blue pigment was identified as natural Afghan lapis lazuli – ‘an extremely precious pigment that reveals the importance of the palace’, Ayora-Cañada points out. And they identified synthetic ultramarine blue in one of the vaults, revealing a recent restoration.

‘The researchers were able to provide interesting information to the restorers in real time, but the work isn’t particularly innovative,’ says Annarosa Mangone, an expert in analysing archaeological finds from the University of Bari, Italy. ‘Also, it is rather disappointing that they didn’t identify green and bluish-green pigments; probably, providing the spectrometer with an additional 514nm laser would be sufficient for that.’ However, she adds that the research represents an appealing application of Raman spectroscopy in restoration, especially for pigment degradation processes.

The possibility of using a 514nm laser was considered by Ayora-Cañada, although she does point out that fluorescence interference with this excitation line is usually a major problem. She adds that there is much interest in studying a monument like the Alhambra under such difficult measurement conditions.