A digital compact disc integrated with a microfluidic device to analyse cells has been developed by scientists in the US. The disc can be inserted into a standard computer disc drive for analysis and could be used to diagnose diseases.

Gang Logan Liu and coworkers at the University of Illinois at Urbana-Champaign built a layer onto a CD that converts biological information into digital information to detect the presence of cells and their size and number. Blood cell counting and sizing are often standard medical practices in the diagnosis of diseases such as leukaemia, anaemia and Aids.

A lack of rapid, accurate and affordable cellular diagnostic equipment in remote areas, on battle fields and in third world countries inspired the invention, says Liu. ’By using a microfluidic powered compact disc device similar to a music CD, we can transform computers into powerful, highly sensitive and low cost cellular diagnostic equipment, so that medical workers only need a portable computer and a few CDs to diagnose diseases,’ he adds. 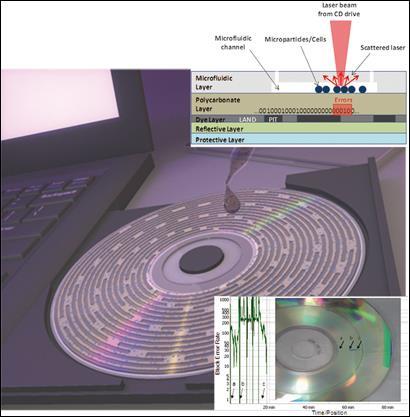 The team made the device by burning an audio file consisting of a repeating sequence of binary numbers onto a CD’s surface. On top of this, they added a microfluidic layer with a channel. They injected small fluid samples of cells into the channel and focused the laser beam from a CD drive onto the disc’s data layer, which reads the binary code. Any particles on the layer interfere with the laser beam, interrupting the code and altering the data readout in graphs of error against time. The size of the response correlates with the cells’ shape, concentration and optical density.

’This is the first time that anybody has demonstrated that you can use an existing CD system in a PC for cell and microparticle counting,’ says Luke Lee, an expert in microfluidic cell analysis at the University of California, Berkeley, US. ’Now, with diagnostic chips, we have to figure out different detection systems and then create a new box for it. Here, a box is available and you basically adapt existing detection systems for decoding the sample through the CD detector.’ Lee thinks that, in the future, the device could be used to test blood at home as a form of personalised medicine. ’We would be able to see our physiological fluctuations by looking at multiple biomarkers for, let’s say, cardiac disease or cancers. We could pass on the information to our doctor, reducing the cost of healthcare and allowing patients and doctors to work together for preventive medicine.’

In the future, Liu hopes to develop the next generation of digital microfluidic compact discs to analyse biofluids such as blood and urine. He expects to face some challenges including controlling accurate optical analysis, digital information decoding and cell suspension fluid dynamics on the CD.