The benefits of a diet rich in fish outweigh possible risks of mercury poisoning.

The benefits of a diet rich in fish outweigh risks of mercury poisoning, say researchers who studied the children of mothers exposed to methyl mercury during pregnancy. The researchers are calling for action from policy makers. 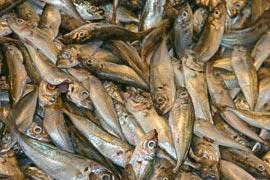 Methyl mercury bioaccumulates in fish and is a neurotoxin, causing schizophrenia, depression and bipolar disease. The worst known incident of widespread mercury poisoning was seen in Minamata Bay, Japan in 1952. Those most affected were unborn children of women who were pregnant at the time of the poisoning.

Philip Davidson at Rochester University, US began a long-term study of children, now aged 15, from the Seychelles in the Indian Ocean to test whether eating fish during pregnancy affects children’s brain development. His study so far has shown no difference in IQ for children whose mothers were exposed to different levels of methyl mercury, which averaged 6.9 parts per million measured in maternal hair.

’We ought to be cautious about propagating public health policies that limit fish consumption during pregnancy,’ Davidson told the American Association for the Advancement of Science.

This sentiment is echoed by Susan Carlson from the medical center at the University of Kansas, US, who said omega-3 fatty acid intake during pregnancy has clear benefits for children. ’It should be obvious that we need to maintain fish intake,’ she said, calling for more in depth trials.

Hexanoic acids in fish have been implicated in human evolution and brain development. Michael Crawford, director of the Institute of Brain Chemistry and Human Nutrition at London Metropolitan University, UK, said: ’If we’re right that seafood was the trigger for human evolution, one needs to look very closely at what’s happening in terms of human health today.’ Brain disorders have overtaken all other disorders, including heart disease, in the European Union, he said.

The US food and drug administration (FDA) is investigating the risks and benefits of eating fish, and the recommended number of portions that should be eaten each week. In the Seychelles the average was 11 portions eaten each week, but in the US that number plummets to just one portion. ’We are concerned that there exists a class of food safety risks that we have not considered before,’ said Phil Spiller, who is leading the FDA’s modeling team doing the risk-benefit analysis. If the public think they are at risk from mercury exposure, and stop eating fish, they could lose out on other benefits, he said.