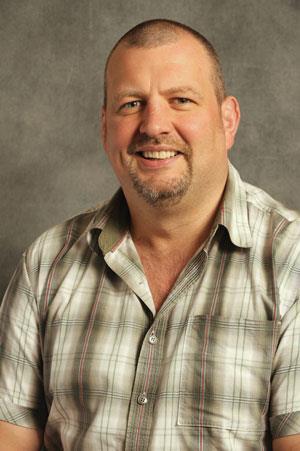 Duncan Graham is professor of chemistry at the University of Strathclyde, UK. He was recently appointed chair of the editorial board for Analyst, and will take up the role in 2014. His research areas include nucleic acid chemistry and synthetic chemistry for bioanalysis. Currently he is working on functionalised metallic nanoparticles that can be used for the diagnosis and treatment of disease.

What motivated you to specialise in SERS (surface enhanced Raman spectroscopy)?

I think the speciality really picked me. I became involved in SERS because I could do synthetic chemistry. When I was doing my postdoc they needed someone to make some modified DNA and I did this for 3 months. Afterwards I thought that SERS was quite interesting. I could see how chemistry could expand the subject. It had normally been physical chemists or physicists who had been investigating this subject. But nobody had been making molecules designed for use with the technique. That opened my eyes to the power of chemistry in an analytical role using a physical technique for biological analysis. So I really landed on my feet.

Your work covers many fields. As scientific problems begin to cover several disciplines how does an individual scientist find a balance between specialising in one field and having a broad understanding of many other fields?

That’s a good question, and one that I worry about sometimes. I trained as a chemist, but my research is now taking me into many different areas. It really comes down to how much you can read and how much you can learn from your collaborators. It’s a problem but I think chemists are very well equipped to learn about other subjects – to dip into physics, to dip into biology, to dip into engineering. We’re never going to be experts but we will know enough to move forward with our own science.

India is becoming a major player in chemical research. How important do you think chemistry is to the future of India and how important is it for us to form collaborations?

India’s population is growing. It’s also growing in terms of number of scientists. The government is investing heavily in training and PhD funding, and chemistry is core to a lot of their activities. The problem is that they don’t have many postdoctoral researchers, because most see it as being more beneficial to go overseas for that. So there is a real gap between the PhD and the academic level. That is something that I think collaboration with the UK can help with, by forming partnerships and encouraging postdoctoral fellowships and researchers. For instance we’ve [the University of Strathclyde] recently signed a memorandum of understanding with the Indian Institute of Technology Bombay with a view to exchanging students and postdocs. It’s also very important to India’s economy.

How do we encourage the next generation of analytical chemists?

They have to be interest driven. If you’re not interested in a subject then there is no real thirst to find out new things, to move things forward. We’re always asking why. We want to know more. That’s why we do science in the first place.

What are you ultimate goals in research?

The long term goal of the team is to produce smart nanoprobes that can be used for diagnosis or that interact with specific molecules in the body, which can then have a therapeutic effect as well as a diagnostic one – minimal side effects with maximum therapeutic activity, based on smart chemistry, using optics and nanoparticles. So we have some ideas on how we are going to do this. I’m deliberately not using the term ‘theranostics’. We want to be able to detect a specific molecule, not a solid tissue build up or cellular receptor site but rather a molecule in solution inside a biological system. And then when it detects the molecule we’ll see a change. It won’t be a location based phenomenon but a molecule specific one. This is harder but it’s what we’re working on.

What are you most looking forward to in your new role as chair of the editorial board for Analyst?

First of all it’s a great honour. Analyst is the oldest journal for the RSC, and being asked to chair the editorial board is a big honour for a British scientist. I’ve seen the great work that Lisa Hall and Paul Bohn have done before me. The journal has also moved forward significantly in terms of volume and quality, which is daunting. The impact of the science being published is quite high. The challenge will be to maintain that growth, whilst bringing in some fresh ideas to try and do something a little bit different. I don’t know what this will be yet, but I’m starting to think about it. Big shoes to fill!

Which scientist do you most admire and why?

The whole DNA story is what got me interested in science in the first place. I thought the discovery of the double helix was the most interesting thing I’d come across in school. I thought that was fascinating and read the book, The Double Helix by James Watson. So when it came to final year at university and I could do a DNA chemistry research project it was a natural choice for me. Looking back, DNA researchers like Lord Todd and Gobind Khorana, who did some of the early work on the synthesis of DNA before they had today’s technology, were amazing. I mean Khorana made a functional gene, synthetically, in solution phase, which is just outrageous. That sort of thing is quite inspiring. It was a lot of hard work, but very clever. We’re a bit spoilt now with our machines.

What’s the most exotic/far flung location you’ve been to for a conference?

The most challenging was going to Siberia, in February, to visit the National Academy of Sciences in Novosibirsk. When I was there I went to the Siberian National State Opera House as one of the guests of honour and sat in the front row. Four hours of opera in Russian. I’m afraid I did fall asleep for a bit – jet lag of course. I’ve been lucky to go to a lot of exotic places – South Africa, India, Japan, Morocco. Perhaps the one that caused the most raised eyebrows was when I went to Corfu and the only flights I could get meant I had to stay for a week.

I was a makeover model onThe Clothes Show – a UK fashion show that aired in the 1980s and 1990s. It came to my rugby club and they picked four of us that were in need of a makeover.

1997 I think. I had to wear a blue satin suit and blue suede shoes with raised soles. It’s not on YouTube, I’ve checked!

Is there a photo anywhere?

No. I have the video, but that stays in my cupboard!