DNA shapes up for nanoelectronic devices

Researchers have taken a step towards the next generation of high-speed computer chips by controlling how triangle-shaped pieces of DNA mount themselves on a surface. The ’DNA origami’ act as tiny fastening posts to which nanoscale electrical components can easily be attached, and have great potential in futuristic circuitry.

’An advantage of DNA origami is that they can be easily mass-produced in solution - but they stick randomly to surfaces, like throwing a deck of playing cards at the floor,’ says Paul Rothemund of the California Institute of Technology, who worked on the project at  IBM’s Almaden research lab in California, US. 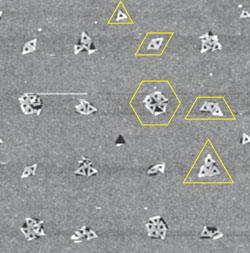 To solve this problem, the team used electron-beam lithography to make sticky triangular binding sites on a silicon dioxide surface - allowing the DNA origami to fit perfectly to form specific shapes and arrangements. ’This process lines them up like little ducks in a row. Not only can we put origami where we want them, but they can be oriented in specific directions,’ adds Rothemund.

The electron-beam creates negatively-charged areas on the surface, then magnesium ions are added which stick to these areas like a coating of glue. DNA origami bind tightly to the magnesium ions, but have enough wiggle-room to rotate into position.

Using this process allows spacing between the components to be as little as six nanometres - about ten times smaller than the sharpest techniques used to make computer chips today. Larger shapes can also be created by making bigger patches on the surface, such as diamond shapes made from two triangles, or hexagons made from six triangles.

’DNA origami is a powerful tool with the ability to create large numbers of complex structures in high resolution,’ says Vincent Rotello at the University of Massachusetts Amherst, US.  ’This is a very elegant way of providing seamless control from the atomic level to the macroscopic.’

But there are still several roadblocks to overcome before electronics made with DNA origami can go into production. Since triangles are symmetrical, any attached components may end up pointing in one of three ways. Shapes are needed that only point in a single direction, yet remain small. Additionally, the researchers need to identify which electronic conductor (such as silicon nanowires, carbon nanotubes or graphene) works best with the origami.