Was there water on the Moon when it first formed? US geochemists say the distribution of chlorine isotopes in lunar rocks suggest not, or at least not as much as other recent studies have proposed.1

Zach Sharp from the University of New Mexico in Albuquerque is quick to point out that his team’s study relates to the Moon’s interior, rather than water on the surface that may have been deposited by cosmic dust and comets or formed by proton bombardment by the solar wind. However, two studies published earlier this year2,3 indicated that there was water present when some lunar rocks formed.

Sharp’s findings hinge on the distribution of the two stable isotopes of chlorine, 37Cl and 35Cl. On Earth, Sharp explains, the ratio of the two isotopes is very homogeneous, varying by at most about 0.1 per cent. 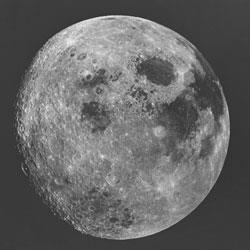 Is the Moon dry inside?

This is because the magma or lava that forms rocks on Earth contains quite a lot of water - in which chlorine is very soluble - so the chlorine is always given off as HCl gas. ’The H-Cl bond is very strong [compared to the bonding in the magma], so it preferentially incorporates 37Cl; but the lighter, faster moving 35Cl is lost into the vapour preferentially,’ says Sharp. ’These two effects tend to cancel out, so the isotope ratio stays the same in the HCl and the remaining rock.’

What the team found when they looked at samples brought back by the Apollo Moon missions, was that the isotope ratios varied by 25 times as much as in Earth materials, with most of the samples being enriched in 37Cl relative to Earth samples. ’That was quite a shock,’ says Sharp, adding that they had to check their analysis very carefully to verify the huge variation. ’The only explanation we could come up with that matches all of our observations was that the lunar magmas were anhydrous.’

If there was no hydrogen (in the form of water) around on the early Moon when the magmas were cooling and crystallising, then chlorine would not be vaporised as HCl but as metal chlorides. ’But the bonding in those metal chlorides is about the same strength as in the magma,’ says Sharp, which means the force driving vaporisation of 37Cl is eliminated and 35Cl ends up being removed preferentially as its lightness and mobility wins out. He adds that the theory fits with other observations that have found deposits of metal chloride salts on the surface of Moon rocks.

’The way we think the Moon formed requires a vastly dry source, depleted of volatile elements. If you don’t have that, nothing else makes sense’ says Steve Mojzsis, a geochemist from the University of Colorado, US. He adds that if Sharp’s team are correct, it’s possible that the water that other teams have found comes from a shallow subsurface layer that has been contaminated with water from an exogenous source, but that would be hard to test. ’If we can explain that the interior of the Moon really is dry,’ says Mojzsis, ’then that helps put some of the pieces together.’