Chemists have developed a drug that not only protects against malaria, but reverses resistance to other antimalarial drugs

US chemists have designed a new class of antimalarial drug that can reverse the malaria parasite’s resistance to existing drugs.

The molecule itself has antimalarial action as well, but the additional ability to reverse resistance makes it ideal for combination therapy.

Resistance of the malaria parasite Plasmodium falciparum to existing drugs such as chloroquine and quinine is becoming a serious problem in the battle against one of the most devastating global diseases. Many strains of the parasite have become resistant by evolving a protein, called PfCRT, which actively pumps drug molecules out of the target area, rendering them ineffective. To help prevent resistance, the World Health Organization (WHO) has stipulated that the newest antimalarials should only be used in combination with other drugs.

Jane Kelly and Michael Riscoe from the Portland Veterans Affairs Medical Center, Oregon, discovered that tricyclic acridone molecules with a short alkyl amine chain attached to the central nitrogen atom could make chloroquine-resistant parasites susceptible to the drug again. This action is attributed to blocking the PfCRT pump protein, meaning that the chloroquine can reach its target.

By building this ’chemosensitising’ functionality into an antimalarial acridone molecule, the team thought they might be able to design a drug which could both kill the parasite and increase the effectiveness of existing drugs when given in combination therapy.

The group developed their lead compound and were excited to find that it did indeed fulfil the dual role, acting both as an antimalarial on its own and a chemosensitising agent to reverse resistance in drug-resistant parasites. 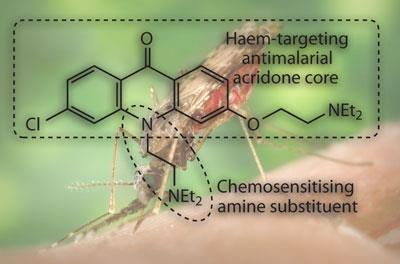 ’We also had a bonus effect,’ says Riscoe: ’there is a synergy between these dual-functional acridones and drugs like quinine and chloroquine, even in parasites that aren’t resistant.’ This means that the new drug reinforces the effect of existing antimalarials, whether or not the parasite would normally be resistant to those drugs.

’We’re not quite sure of the exact cause of this synergy,’ explains Kelly, ’but we think it has something to do with PfCRT. The synergy has significant meaning because it reduces the dose required for either drug to be effective - this makes the treatment cheaper and reduces side effects, which are major concerns in malaria treatment.’ Riscoe adds that ’our studies suggest that one could possibly deliver one third of the total amount of drug using the combination compared to a single drug alone.’

Tim Egan from the University of Cape Town, South Africa, explains why the work is so interesting: ’They combine two different pharmacophores [parts of the molecule that give it its activity] in one molecule, which people have suggested as a way forward for antimalarials for some time, but it hasn’t really been demonstrated before.’

’The pharmacophores also overlap,’ Egan adds, ’it’s not like some molecules we’ve seen before where two distinct molecules - a resistance-reversing agent and a chloroquine-like antimalarial - have just been tethered together.’

’We’re still in the process of optimisation,’ Kelly stresses, ’and there are many steps to overcome before we can think about clinical trials, but we’ve had some good results in our early mouse studies and safety and toxicity screening. We’re also looking into whether this strategy for maximising a drug’s potential and sustainability could be applied in other fields, since drug pumping proteins are also a common resistance mechanism in cancer and antibacterial treatment.’