Scientists in Israel have added a new dimension to information storage systems by combining nanotechnology with electrochemistry, surface modification and magnetism. 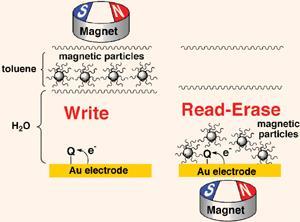 Most information storage devices use light signals to encode information, and optical or electrical stimuli to read the information. These can suffer from degradation of the photoactive materials after repeated illuminations, and thermal loss of the stored information over time.

Itamar Willner and Eugenii Katz at the Hebrew University of Jerusalem have come up with a creative way around these problems by developing a novel electrochemically activated write-read-erase technique, gated by magnetic nanoparticles.

Their system consists of an array of gold electrodes, functionalised with quinone, in conjunction with a two phase aqueous-toluene component. The electrode is initially exposed to the aqueous electrolyte solution while the magnetic nanoparticles are dispersed in the upper toluene layer. When a magnet is placed below the electrode, the nanoparticles are magnetically transported to the electrode surface. They can then be retracted from the surface simply by placing the magnet at the top of the electrochemical cell.

Because the particles are hydrophobically modified, they carry with them a small amount of toluene solvent, creating a thin, non-aqueous film on the electrode surface. The quinone modified electrode shows a significantly different electrochemical response in aqueous and non-aqueous environments. It is this difference that the researchers have exploited to develop the write-read-erase method.