Enriching the origin of life theory

An enantioenrichment of the amino acid valine, which could shed light on the origin of chirality on Earth, has been achieved by scientists in Spain.

Chirality is important as amino acids and sugars are present in one single enantiomer in all organisms, and enzymes and receptors are chiral too. As organisms don’t have the same response to different enantiomers and many active components of medicines are chiral, understanding how pure enantiomers form can help us understand how we evolved and help develop the medicines of the future.

Crist?bal Viedma, from the Complutense University in Madrid, and colleagues have been able to amplify the purity of one enantiomer over another in valine, one of life’s building blocks. They chose valine because it was found in meteorite samples in a non-racemic form and the enantiomeric excesses matched values obtained under simulated interstellar conditions. 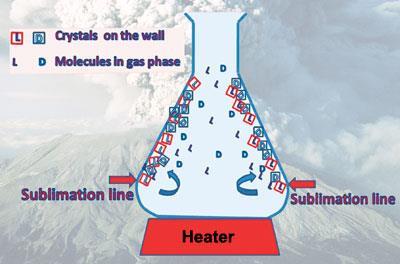 Viedma’s team sublimated a racemic mixture of valine. When the valine condensed, it formed a conglomerate. A conglomerate is a mixture of crystals formed by pure enantiomers - the pure crystals can be extracted from the mixture. The group found that when they continued to heat the flask, this amplified the initial enantiomeric excess. ’One can imagine similar processes occurring near volcanoes where temperature gradients are enormous and such scenarios would have been plausible on primitive Earth,’ comments Viedma.

Up until now, enantioenrichment has been studied with solid-liquid systems, even though gas-solid transformations may have been plausible in both our primeval planet and star-forming regions. ’It is true that gas-solid transformations may not be as general as solid-liquid equilibria, but you never know what is going to turn out to be useful,’ says Viedma. ’This is an interesting project in terms of the intriguing conundrum of the origin of biological chirality as well as extensions to the manufacture of chiral substances.’

’I have no doubt that it will change my understanding of how crystals grow in a profound way,’ says Michael McBride, who studies chemical reactivity and physical properties of organic solids at Yale University, US. ’Understanding this behaviour might expand the range of what we can control in chemistry and materials science.’