The European Commission has issued a green paper to improve professional mobility within the European Union. The paper includes proposals for a European professional card, valid in all 27 EU member nations, as well as improved EU-wide training requirements.

The Commission also is aiming at expanding automatic EU recognition to cover most professions. Under current regulations, only seven professions enjoy automatic recognition throughout the EU: architects, dentists, doctors, midwives, nurses, pharmacists and veterinary surgeons. The Commission is seeking comment on the proposals by September, and plans to complete an official ’legislative proposal’ by the end of the year for approval next year.

’What the Commission wants to do is simplify the process of recognition so there is as little administrative input as possible, to make moving as quick and simple as possible,’ says Tom Keighley, a fellow at the Royal College of Nursing who is advising both the UK and the EU on the revision of current regulations. 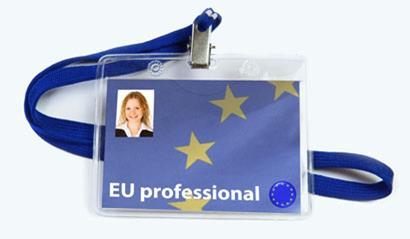 The centrepiece of a new regulation would be the professional card. In the green paper, the Commission says the card could be issued by the competent authority in the member nation from which the professional is departing and include all the relevant information about that professional for potential clients and employers.

Harmonised training requirements for various professions, acceptable at high levels to all EU nations, would be a prerequisite, says Keighley, a former faculty member and assistant dean at the University of Leeds.

The automatic recognition currently in place is based on legislation originally approved in 1977, and last revised in 2007, he says, adding that over the years automatic recognition has worked well and been used extensively by those professions. When nurses, pharmacists and the other recognised professions have moved, the receiving countries generally ’would trust statements’ from the home nations, he says. But that changed after 10 eastern European nations joined the EU in 2004 and 2007, with some of them having different training standards or simply not collecting information required in western European nations.

The Commission says that at least 200,000 professionals have moved within the EU and used automatic recognition of their qualifications since 1998, when statistics first started being collected. However, the actual number is likely ’much higher as notified statistics have been incomplete and in any event did not cover professionals moving just on a temporary basis’.