DNA with six, rather than four, bases could be used as the genetic code for synthetic life

Chemists have created an artificial genetic code capable of evolving to produce new genes. The code consists of six bases, rather than the standard four, and could form the basis of randomly mutating synthetic life.

Steven Benner, at the Foundation for Applied Molecular Evolution, US, credited as the man who kick-started the field of ’synthetic biology’, is behind the work. Benner created two new molecules which can be slotted into DNA alongside regular adenine (A), thymine (T), cytosine (C) and guanine (G) bases. The new bases, dubbed ’P’ and ’Z,’ look similar to natural ones but have orthogonal hydrogen bonding patterns. 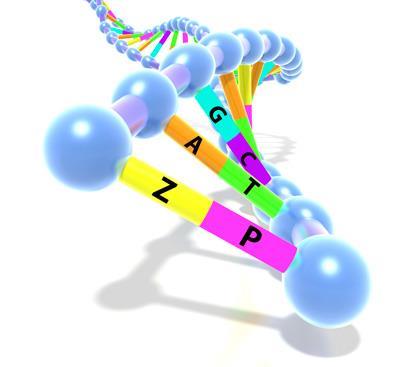 Unnatural nucleotides have been incorporated into DNA before, but are usually eliminated during replication because DNA copying enzymes don’t accept them. According to one theory, the enzymes use a streak of continuous electron density running along the double helix to recognise the bases. Benner designed his molecules so that their electron dense regions are orientated so as to continue the pattern. This worked well and Benner says his group ’have already obtained GACTZP DNA replication in artificial cells, and are working to introduce [it] into E. coli’.

P and Z are the latest additions to the genetic code

By altering the conditions under which DNA is replicated Benner can also control the degree of accuracy with which the DNA is copied. ’It means you can establish environments where you can do almost whatever you want with the base pair,’ says Floyd Romesberg from the Scripps Research Institute, US, an expert on synthetic nucleotides.

Benner’s team showed that using conditions which allowed a little room for copying errors led to random mutations in the code. ’The reason that’s significant is because a geneticist would call this forward mutation,’ says Romesberg. ’That forms the basis of what could be a Darwinian evolution-like system.’

Tweaking the conditions to allow very high fidelity copying was also possible, and proved useful for amplification by polymerase chain reaction, where lots of identical copies of DNA are desirable. Benner has also developed a sequencing technique for the new genetic language based on enzymes which cut the DNA specifically where unnatural bases appear.

The expanded alphabet also has practical implications. Random nucleotide pools can be used to form aptamers - DNA molecules that form around targets and act as receptors and catalysts - which are already being investigated for diagnostics and drugs. This is already a useful strategy but adding in new nucleotides will provide ’richer reservoirs of better receptors and more active catalysts than GATC alone,’ says Zunyi Yang, a coauthor of the work.