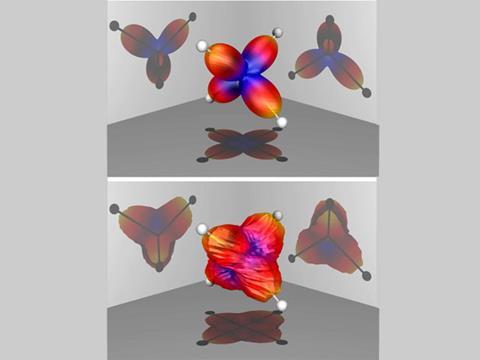 Researchers from the US and Germany have demonstrated a new way to obtain accurate three-dimensional images of molecules, with precise measurements of the geometry of the molecule's chemical bonds.1 The finding opens the tantalising prospect of being able to capture changes in bond geometry during a chemical reaction.

The research team, led by William McCurdy at the Lawrence Berkeley National Laboratory and the University of California, Davis, and Allen Landers of Auburn University in Alabama, used a technique called cold-target recoil-ion momentum spectroscopy (COLTRIMS) to image methane molecules. A supersonic jet of methane is fed into the detection chamber, where it is pulsed with high energy synchrotron x-rays. The pulses are timed so that on average only one molecule of methane is hit by a given pulse.

'We do this hundreds of thousands of times and build up a huge set of data, which we can then mine,' McCurdy says. Analysis of the molecular fragments provides information about the orientation of the molecule just before it explodes. The pattern of photoelectrons can then be correlated with the molecule's original orientation. Remarkably, as the data analysis proceeded it became clear that as the electrons are catapulted from the parent molecule, they follow the direction of the bonds.

'At least in some cases the scattering patterns of the electrons even looked like the geometry of the molecule,' says McCurdy. 'At first we did not believe it.'

The success of the experiments relied largely on intensive theoretical calculations. 'This work was a beautiful example where theory and experiment worked hand in hand, and we are quite proud,' Landers says.

One key aspect of the technique is that, unlike other approaches, the molecules do not need to be oriented beforehand. The prospect now is that it may be possible to interrogate chemical reactions with ultra-short pulses of high-energy x-rays to watch bond changes as they happen.

Russell Minns, who researches photodissociation dynamics of small molecules at the University of Southampton, UK, is impressed. 'It is a really beautiful demonstration of the power of coincidence imaging in general and of COLTRIMS in particular,' he says. 'The real test now is can these experiments be done on molecules as they react, if so, this moves scientists even closer to the dream of making a "molecular movie" and directly measuring how the chemical bonds within a molecule change during a chemical reaction.'