Scientists in the US have upgraded the circuitry on a popular microscopy technique to boost the speed of imaging by about 100 times - fast enough to watch a ’video’ of nanoscale processes.

Since its conception in the 1980s, Scanning Tunnelling Microscopy (STM) has been instrumental to the development of applications ranging from superconductors to nanomachines, but a typical image takes around one minute to produce. This sluggish pace has frustrated scientists who are monitoring chemical changes or moving nanomachines.

STM uses a sharp tip that is brought very close to the target surface to exploit a phenomenon called ’quantum tunnelling’. When the tip of the microscope is within about one nanometre of the surface, electrons can ’tunnel’ through the gap between them. This small flow of electrons is referred to as the ’tunnelling current’. By measuring this current, the tip can be controlled to move across the surface at a constant distance, allowing a picture of the topography to be built up. 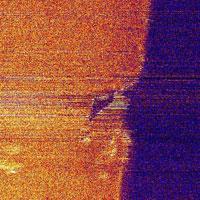 RF-STM image of an atomic scale step on a graphite surface. Scan area is 205 nm ? 205 nm. The image was acquired in 2 seconds.

But until now, measuring the tunnelling current has been time consuming and restricted the speed at which the STM tip can travel.

Kamil Ekinci, an author on the project at Boston University, Massachusetts, told Chemistry World: ’The key was applying a simple measurement scheme called "impedance matching" to the tunnelling current measurement circuit. This improves the response time of the circuit, allowing the tip to travel more quickly.’

Using the new technique, STM images can be produced hundreds of times faster - giving researchers the ability to shoot ’videos’ of nanoscale processes. Ekinci continued: ’People who want to use fast STMs will find this development welcome. Those studying exotic materials may be able to perform new measurements that were otherwise not possible. Another attractive thing about this technique is that it’s quite straightforward to incorporate this technology into existing STM systems.’

Kevin Kelly at Rice University in Houston, Texas, uses STM to analyse nanomachines. ’I can definitely see this research being very useful,’ he told Chemistry World. ’Dynamic imaging will allow us to see more of the fundamental physics and chemistry of the nanoworld.’

Kelly added: ’A typical way to deal with the low speed of STM is to control the environment by lowering the temperature. This makes things move more slowly so that you can catch them in the image. But a different phenomenon might be occurring at higher temperature - we just don’t know because we haven’t been fast enough to capture them.’