R&D on the agenda as FP7 talks continue

With time running out to deliver the EU’s seventh research framework programme (FP7), ministers have met in Finland to create a road map for innovation policy that could boost the stagnant European economy.

FP7, the EU’s chief instrument for funding scientific research and technological development from 2007 to 2013, cleared first reading in the European Parliament on 15 June. But the €54.5 billion (?37.6 billion) plan must also be approved by individual EU states, six of which prohibit or impose tight restrictions on embryonic stem cell research currently included in the funding scheme. Opponents to the research predicted that ethical safeguards included in the framework would fail to satisfy enough states to allow FP7 to proceed in its current form. 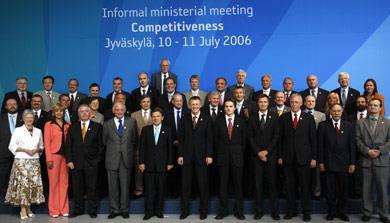 If FP7 does eventually get the go ahead, ministers hope that it will refocus European science funding towards innovation. Although the EU intends to become the world’s leading knowledge-based economy by 2010 (Chemistry World, June 2006, p50), China is forecast to overtake Europe in R&D spending in relation to GDP by that time.

’The European paradox is that we have very good research but not enough innovation,’ said Polish MEP Jerzy Buzek, rapporteur on FP7 for the parliament’s industry, research and energy committee.

’Innovation is the only way we can achieve competitiveness,’ agreed G?nter Verheugen, EU commissioner for enterprise and industry, at a meeting of the EU competitiveness council on 11 July in Jyv?skyl?, Finland.