UK researchers claim to have created the world’s first practical transistors cut from ribbons of graphene, a single layer of carbon atoms. Andre Geim and Kostya Novoselov, at the University of Manchester, include details of their breakthrough in a review article to be published in the March issue of Nature Materials, though their research has not yet been peer reviewed.1

Just one atom thick and less than fifty atoms (a few nanometres) wide, the tiny transistors pave the way for a new breed of computer chips smaller and faster than those based on silicon. The number of silicon transistors crammed onto a chip has so far doubled roughly every two years, as Intel co-founder Gordon Moore predicted in his eponymous ’law’. But there are fundamental limits to the capacity of silicon-based electronics, as components become so small that current begins to leak.

Geim thinks his nanometre-sized transistors could go beyond those limits. Unlike silicon, his team have found, graphene is stable and conducts electricity when cut into strips of only a few nanometres wide. Strong carbon-carbon bonds hold the honeycomb structure together even at room temperature where silicon oxidises and decomposes. 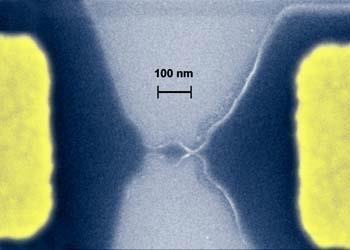 Source: © A Geim, U. Manchester

This tiny transistor is built entirely from sheets of graphene

Taking advantage of this unusual stability, the Manchester team have created single-electron transistors, with two narrow ribbons of graphene (effectively acting as electrical leads) surrounding a central ’quantum dot’ - a barrier that controls electron flow, which in this case is also made of graphene. These transistors, they claim, can be used to precisely switch current on and off at room temperature.

Graphene transistors have been announced before, by teams led by Walt de Heer at the University of California, Berkeley, US, and Max Lemme at the electronics company AMO in Aachen, Germany. But the Manchester researchers say those transistors - based on ideas they themselves proposed when discovering graphene three years ago - were ’leaky’: current continued to flow even when the transistor was supposedly switched off. Lemme told Chemistry World that he thought his team were the first to announce graphene transistors, when they used an electric field to control current flow through a sheet of graphene,2 but conceded that if the new transistors did indeed switch off sharply, they would represent another step forward.

Leonid Ponomarenko, another member of the Manchester team, said that making the new transistors was not easy. ’At the present time no technology can cut individual elements with nanometre precision. We have to rely on chance by narrowing our ribbons to a few nanometres in width. Some of them were too wide and did not work properly whereas others were over-cut and broken,’ he said. But he was optimistic that the proof-of-concept technique could be scaled up to make true nanometre-sized circuits. But it’s still early days for the technology: Geim wouldn’t expect graphene-based circuits to overcome silicon technology before 2025. 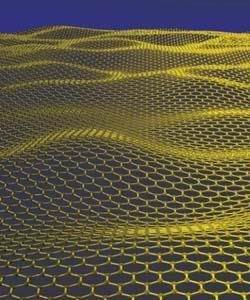 Source: © A Geim, U. Manchester

Graphene sheets are not entirely flat

You are only coming through in waves

The transistors’ unveiling marks the latest development in the rapid rise of graphene, which has become one of the hottest materials in physics since its discovery in 2004.3 Electrons shoot through the carbon sheet with minimal resistance, while the material’s strength has seen it mooted for use in tough lightweight polymer composites.

One of graphene’s simplest properties - that of being a perfectly flat 2D sheet - is the most mystifying of all, said Geim. In theory, thermal fluctuations should cause any perfect 2D crystal to vibrate out of the plane, with sufficient energy to break its bonds. Scientists had surmised that graphene could only appear both stable and perfectly flat because it was usually stabilised on a substrate.

But in Nature  this week, Geim’s team also reveals that the supposedly flat sheet is in fact corrugated; tiny ripples of graphene crystallites make the sheets 3D when suspended in isolation.4 That’s a relief for the theorists, and the suspended thin membranes the Manchester team have created could also add to graphene’s lengthening list of applications, perhaps acting as atomic-scale sieves.

But the most exciting applications remain in electronics, says Geim. Out of all the possible substitutes for silicon, he told Chemistry World, ’only graphene still stands a reasonable chance’.