China has licensed its first herbal compound patent to an overseas pharmaceutical company.The UK-based Phytopharm is planning global clinical trials of the compound, with the aim of developing a drug for memory and concentration. 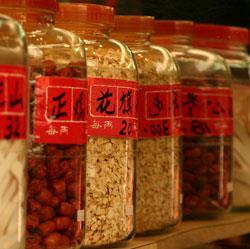 ’This is the first time that China has licensed a herbal patent for an innovative drug to an international pharmaceutical company,’ said Sun Jianzhong, president of the Chinese Academy of Military Medical Sciences (CAMMS). ’This is an important step towards the modernization of traditional Chinese medicine (TCM).’

The compound was identified at the CAMMS’ Beijing Institute of Radiation Medicine. It is a steroidal saponin, a group of active ingredients often derived from the plant genus Dioscorea, which includes yams. Patent records from the State Intellectual Property Office indicate that the compound is derived from Rhizoma Anemarrhenae  (Zhimu), a herb frequently used in TCM.

Lead researcher Ma Baiping of the Beijing Institute of Radiation Medicine noted that a 10-year study of the compound had revealed its activity in the brains of animal models: increasing blood flow to the brain, reducing inflammation and stimulating nerve cell growth, and significantly improving memory in rats. ’We believe it is a highly promising drug candidate for dementia,’ Ma told Chemistry World.

Phytopharm has not publicised how much it paid for the license, although chief executive officer Daryl Rees said it was ’millions and millions’ of pounds.

’We think the investment is worthwhile, as it opens a door to the huge treasures of traditional Chinese medicines,’ said Rees, adding that such a deal would have been impossible without the rising awareness among Chinese scientists and their institutes of the benefits of patenting research findings in a mature intellectual property system.
The collaboration and license agreement between Beijing Institute of Radiation Medicine and Phytopharm extends to other patented compounds that may have potential in other disease areas, such as vascular disease and stroke.