Water and organic molecules on Earth could have been brought here by impacting asteroids and comets, say two groups of US astronomers who have used infrared spectroscopy to find ice on the surface of a large asteroid called 24 Themis.

Both teams used Nasa’s SpeX telescope in Hawaii to study the infrared spectra of Themis and found a signal very characteristic of water ice on the surface. Careful comparison to known materials and spectral modelling led the teams to conclude, independently, that the ice is present as a thin frost layer covering the surface of the asteroid.

One international team, led by Humberto Campins from the University of Central Florida in Orlando, was interested in Themis because smaller fragments from the same family of asteroids have comet-like dust tails, indicating that ice is subliming from them and carrying dust with it.1 Campins reasoned there might be ice on Themis too, and its large size makes it much more amenable to study. 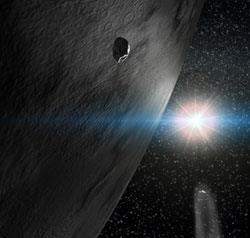 Small comet-like companions indicated the possibility of ice on the larger asteroid, 24 Themis

On the other hand, Andrew Rivkin from Johns Hopkins University in Maryland and Joshua Emery from the University of Tennessee in Knoxville, looked at Themis as part of a much wider survey of asteroids searching for water in the form of hydrated minerals.2

’The two papers are very complementary and really strengthen each other’s results,’ says Campins. One of the major differences, he explains, is that Rivkin and Emery made several observations in different parts of Themis’s orbit, whereas Campins and his team concentrated on different times in a single rotation of the asteroid around its axis. ’We couldn’t tell that the ice was on the whole surface from just our observations, and neither could they,’ explains Campins, ’but combining the two we’ve definitely seen the whole surface’.

The fact that the water covers the whole surface as a fine frost was puzzling to both groups, since ice ought to sublime into space quite quickly under the conditions on Themis’s surface. The groups propose that the layer must be being regenerated from a colder subsurface ice reservoir, probably by slow sublimation, with some vapour recondensing to form the frost layer - a phenomenon never seen before but possibly down to the size, and hence gravity, of Themis making it harder for sublimed vapour to escape.

Both teams also found signals indicative of organic molecules in their spectra. Rivkin explains that the data show that there are molecules with C-H bonds and possibly some aromatic groups. He adds that although this is the first evidence for organic molecules in asteroid spectra, it’s not necessarily surprising, since organic molecules are seen in meteorites on Earth. ’They kind of had to be there somewhere,’ he quips, ’so it helps to be able to see them [on Themis]’.

Finding water and organics on Themis adds weight to the theory that asteroids could have contributed to bringing in Earth’s water and even the molecules that kicked off life on the planet. ’Solar system formation models suggest that when it formed, Earth was too hot to have any water,’ says Rivkin. That led to suggestions that water came from later impacts of icy objects like comets. But, explains Rivkin, the hydrogen-deuterium isotope ratio seen in comet ice doesn’t quite match up with water on Earth, so another source might help explain Earth’s water. However, he adds that measuring the H-D ratio for the ice on Themis will be difficult without being able to see it subliming like a comet’s tail, and may even require sending a physical probe to the surface, which is a long way off.