Many protein drugs, such as insulin and erythropoietin, are inactivated by the digestive enzymes in the gut, and so have to be regularly injected into the blood. Now a novel gel that delivers drugs in response to a chemical cue may help to make these daily jabs a thing of the past.

A team led by Wilfried Weber, based at the Swiss Federal Institute of Technology (ETH) Zurich’s department of biosystems science and engineering, bound a part of the bacterial enzyme gyrase (GyrB) to polyacrylamide. They then used coumermycin, an antibiotic that can bind to two molecules of GyrB, to crosslink the polymers to form a hydrogel - a network of polymer chains that are insoluble in water.

When they added novobiocin - another antibiotic known to bind to GyrB - the antibiotic displaced coumermycin and dissolved the gel. 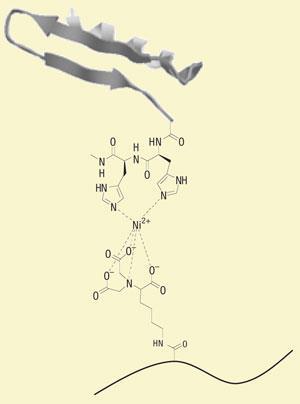 The researchers next incorporated vascular endothelial growth factor (VEGF), which is important for wound healing and the growth of blood vessels, into the hydrogels by binding it to polyacrylamide chains. The VEGF-containing hydrogels are able to release the growth factor in response to novobiocin.    The team also showed that the hydrogels don’t have any toxic effects on cultured cells.

The researchers are now testing the system in rats to see if the hydrogels are stable when implanted in animals and whether drugs released by the gel still have therapeutic effects.

In the future, the hope is that such gels could be injected into a patient and then used to release controlled amounts of protein drugs in response to an antibiotic or other harmless compound.

’This is a very interesting and innovative study,’ says Jindrich Kopecek, a professor of pharmaceutics and pharmaceutical chemistry at the University of Utah, in Salk Lake City. ’The demonstration of pharmacologically controlled protein release bodes well for the development of efficient drug-delivery devices that are compatible with the human physiology.’

But one potential problem with the system is that very high concentrations of novobiocin are needed to trigger release of VEGF, says Kopecek. Another challenge is turning the gel off. ’Our bodies have mechanisms to precisely control the concentrations of growth factors and to remove them once their jobs are done,’ he adds. ’We need similar designs for smart drugs.’