An independent study has shown that German chemistry remains world class, with 16 of 57 universities and eight of 20 research institutes rated as being global leaders in at least one field of chemistry research.

The study, coordinated by the German Science Council, was written after an investigation by a 15-member committee of chemists, 10 from Germany and five from Austria, Switzerland and the Netherlands. 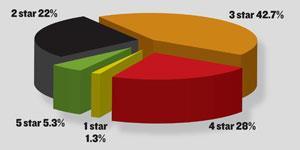 ’We could identify outstanding research in almost all branches of chemistry,’ said Fran?ois Diederich, chairman of the committee and an organic chemist at the Swiss Federal Institute of Technology in Zurich.

The committee conducted the study through what it describes as an ’informed peer review’ process, awarding up to five stars in six areas: Research quality; impact effectiveness of research; efficiency of the research process; development of young chemists; transfer of chemistry research knowledge into general society, and publication.

No universities were awarded a full five stars but universities in Goettingen, Heidelberg, Munich, Berlin and Stuttgart were among those awarded four stars (very good).

Responding to the results of the report, Sean McWhinnie, manager of science policy for the RSC, told Chemistry World, ’I perceive German chemistry as comparable to the UK. I think they both are pretty good.’ But he believes that both lag behind the US, especially in interdisciplinary areas. ’In America, I think they are ahead of the game,’ he said.

According to McWhinnie, the German report is much more comprehensive than anything done so far in the UK. He noted one of the last big studies on UK chemistry - the International Review of Chemistry, chaired by the distinguished US scientist George Whitesides - is now five years old. That study was coordinated by the RSC on behalf of the Engineering and Physical Sciences Research Council (EPSRC).

A new EPSRC study on chemistry is now scheduled for next year and will be more detailed than the Whitesides Review. ’I think we will get something approaching what the Germans have done,’ McWhinnie said.

Charles Casey, former president of the American Chemical Society and professor emeritus at University of Wisconsin-Madison, told Chemistry World that there is little between the top four countries for chemistry research : ’Germany, the US, Japan, Britain-we are all in the same highly competitive league.’

"Germany, the US, Japan, Britain - we are all in the same highly competitive league" - Charles Casey

Casey does not see that old hierarchy changing much in coming years. But he does point to the rapid improvement in Asian chemistry. ’The real growth in chemistry is coming from Asian countries outside of Japan,’ he said. ’The thing that always gets people concerned are changes in trends and growth. New competition is more of a concern.’

Casey added that he would like to see a comparable study for the US: ’I think it would be good for us to know how we are doing.’

’They (VCI) are under the impression that that high quality of chemistry research in Germany is not always recognized by politicians and others,’ Lange said. He added that the VCI and Chemical Society also believe that the study will provide a roadmap for further improvement, as well as potential collaboration and consolidation possibilities. However, some study results will remain proprietary, said Lange, and be seen only by relevant individual universities and institutes.