Germany’s Federal Cabinet, led by Chancellor Angela Merkel, has approved a 2012 budget proposal that will boost federal research and education spending to €12.8 billion (?11.3 billion), up 10 per cent on 2011.

In announcing the budget package, education and research minister Annette Schavan said that the huge increase will focus on research to help Germany become a global high-tech leader, especially in the fields of climate and energy, healthcare and nutrition, transportation, security and communications. This push for leadership will be coordinated by Germany’s High-Tech Strategy 2020 initiative. 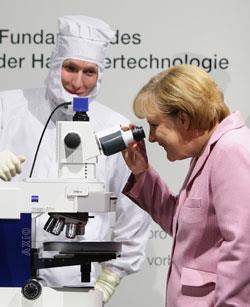 In a statement issued after the approval of the proposed budget on 6 July, Schavan described the increase as an ’investment in heads’ designed to ’wake up’ and develop existing potential. ’In a country of few natural resources like Germany, this is an essential investment in the future,’ she said.

Jurij von Kreisler, head of the finance department at the German Research Foundation (DFG), the country’s main research funding body, said that the German scientific community is in a jubilant mood. ’There is no such thing as enough money for scientists and researchers,’ von Kreisler said. ’But compared with other EU nations, and even the US, this budget is a real luxury. It is really a huge success and, actually, I didn’t believe it when I saw it.’

The DFG budget will rise by 5 per cent in 2012 to around €4.3 billion, according to the research ministry. Von Kreisler said that the federal government’s contribution accounts for about 58 per cent of the DFG’s budget, with Germany’s 16 states contributing the rest.

Although the budget still needs final parliamentary approval later this year, von Kreisler said that this is a formality. ’I know there is the political will to approve it,’ he said.

Wolfram Koch, executive director of the German Chemical Society, says: ’It is of course positive that the budget of the ministry of education and research increases by almost 10 per cent, which is among the highest increases of all ministries.’

However, Koch notes that the biggest budgetary increase is a 60 per cent jump in the Higher Education Pact (HEP) to €1.46 billion in 2012. The pact, approved in 2009, aims to add 275,000 new university places. ’This money does not go into support for research,’ Koch says. ’Nevertheless, I think the German government is on the right track here, even though we of course are convinced that earmarking even more resources to research, and in particular basic research, would benefit our country even more.’

Von Kreisler, however, sees future payoffs to research from the HEP. ’It is very important for universities to get this money,’ he says. ’If you don’t educate more bachelor’s and master’s [degree students], there will be no new researchers in the future.’

The three biggest spending categories in the budget are project aid, institutional aid and special aid. Project aid receives a rise of 17.1 per cent to €5.38 billion. As well as HEP, project aid includes the Excellence Initiative, designed to create a so-called German Ivy League of top universities. Institutional aid funding will rise 6.8 per cent to €4.43 billion. In addition to DFG funding, this category includes funding for the Max Planck Society, Fraunhofer Society, and the Helmholtz Association. Special aid will receive an additional 3.3 per cent at €2.86 billion. This grouping provides financial assistance to university students, as well as continuing education programmes and trade education.

However, Koch says that the government’s focus is on the High-Tech Strategy 2020 initiative and chemistry is taking a back seat. ’While chemistry is certainly essential here, it is not mentioned explicitly and we have the impression that the ministry still is not really aware of the important and underpinning role of the chemical sciences,’ he says.

The chemical industry is involved in a number of high-tech programmes receiving federal aid and, therefore, will benefit, Koch says. However, he adds: ’I would not overestimate this. The main demand of the chemical industry, namely to establish tax incentives for research and development, has unfortunately still not been addressed.’