German x-ray laser tunnel gets the go ahead

The German government has approved construction of a 3.4 km-long underground x-ray laser tunnel that will let scientists watch chemical reactions in action at atomic resolution.

The tunnel for the European X-ray Free Electron Laser (XFEL) Project will begin at the German Electron Synchrotron (Desy) site on the western edge of Hamburg. From Desy, already a global accelerator center, the tunnel will run east at depths of up to 38 meters under populated areas toward an underground experimental hall on a 15-hectare research campus in Schenefeld. 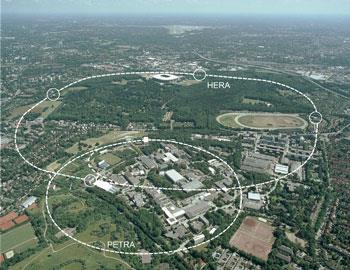 The Desy research center is already home to the Petra accelerator and parts of the 6.3-km-long underground Hera accelerator. The 3.4 km XFEL tunnel will head west from the Desy site

Researchers at XFEL will include chemists, materials scientists, plasma physicists, structural biologists, and geologists, with potential applications for biomedicine, pharmacy, or combustion and catalysis.

Construction of the 986 million Euro (?668) facility will start by the beginning of next year. Germany will cover up to 75 per cent of the cost, with 12 other nations, including the UK, China and Russia, covering the rest. Bids for the massive construction project - that needed approval of German mining authorities - will be invited at a European level in coming months. German education and research minister Annette Schavan, speaking at the launch ceremony on 5 June, said that enough funding is now allocated to allow completion of the XFEL system by 2013.

Two other large, but different, XFEL projects are scheduled to be completed before the European XFEL: one at the Stanford University Linear Accelerator Center, and the other at the Japan Synchrotron Radiation Research Institute. These projects are reported to have spurred the German education and research ministry into starting construction.

Final funding contributions from the 12 participating nations on the European project have not yet been finalised, but representatives of the partner countries said, in a communiqu? signed at the launch ceremony: ’We are convinced that it is appropriate to begin the construction of the XFEL as quickly as possible in view of the international competition situation.’

ThomasTschentscher, a physicist at DESY who is XFEL photo beam coordinator, told Chemistry World that XFEL will for the first time let scientists record chemical reactions at atomic resolution while they are happening, showing how chemical reaction progress, how biomolecules move, or how solids are formed.

’In simple terms, the XFEL allows us to make a movie of the chemical reaction,’ said Tschentscher.

The first 2.1 km of the European XFEL will be reserved for the superconducting electron linear accelerator. Bunches of electrons will travel down this particle accelerator at close to the speed of light before being thrown through a system of magnets with alternating fields, known as undulators.

The electron bunches will turn and bend in response to the magnetic fields, which alternate every 2-5 cm. This bouncing around will cause them to emit flashes of x rays, and as the particles interact with the radiation they will bunch tighter together. This compaction will intensify the light emission and synchronise the x rays.

These intense flashes are used to freeze and record chemical reactions as they occur, usually through diffraction, says Tschentscher. Using the diffraction method, distances as small as 0.1 nanometers between atoms can be measured from many directions, giving a 3D snapshot of the shape of molecules, he said.

David Riley, of the school of mathematics and physics at Queen’s University Belfast, UK, was one of 260 scientists from 22 nations who in January participated in an XFEL users meeting to help plan the system.

Riley, a dense-plasma specialist, says that spending €1 billion euros for a project with such huge scientific potential is money well spent. "This facility has not even been built yet and 260 scientists who went to use it attended a meeting to talk about it,’ he said.