A new gold catalyst developed by UK chemists can catalyse hydrocarbon oxidation, using O2 as the only oxidant. But catalyst particle size is critical - above 2nm diameter, the catalyst loses all activity.

The catalyst was developed by Richard Lambert and colleagues at the University of Cambridge, who used styrene oxidation as a test reaction. The team found that the reaction didn’t require any additional oxidants such as peroxides. Oxygen molecules adsorbed to the gold particles, and then dissociated to give single oxygen atoms that initiated the styrene oxidation. ’Styrene is a very good test molecule which can be handled easily,’ says Marc Armbr?ster, who also works at the University of Cambridge and collaborates with the group.  Oxygenated hydrocarbons are also valuable intermediates for industry.

’The prospect of selective oxidation using molecular oxygen without the addition of additives over a new catalyst is exciting,’ comments Jeroen van Bokhoven, from the Institute for Chemical and Bioengineering at ETH Zurich, Switzerland. ’There seems to be space for trying the catalyst out on more systems and for improving the selectivity,’ van Bokhoven adds.

The catalyst consists of 55-atom gold clusters, which form nanometre-sized particles on inert supports. The Au55 particles are so-called ’magic number’ clusters that contain exactly the right number of atoms for very stable geometries, making them ideally suited to catalysis. 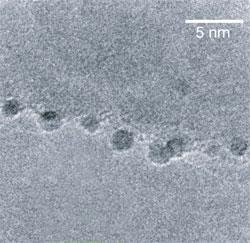 ’We don’t know exactly how the catalyst works but we really want to understand what is going on,’ says Armbr?ster. ’We think that quantum chemistry might be the easiest way to find out what is happening,’ he adds. ’We also need to do further lab work, for example to discover the catalyst’s lifetime and to establish the influence of different loadings of the catalyst.’

The research team hopes that its gold clusters will provide a route to the synthesis of robust gold catalysts with practical applications for synthetic chemistry. ’We are quite some way off an industrial catalyst, but we see no barrier to gold clusters as an eventual route to gold catalysts of real industrial relevance,’ says Mark Turner, who worked with Lambert on the project. ’What’s more, they offer the opportunity of carrying out industrially important epoxidation reactions with true atom economy - using only oxygen.’