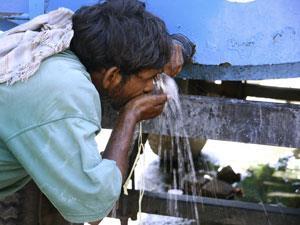 Groundwater contaminated with arsenic has led to an epidemic of arsenic poisoning in parts of Bangladesh and India. Scientists in China have developed a sensor to detect arsenic quickly and accurately in water.

Aptamers are artificial single stranded DNA or RNA oligonucleotides that can bind to specific target molecules. They have been used for real-time and on-site detection of heavy metals such as lead, mercury and uranium. Gold nanoparticles provide a colorimetric response in the presence of their target molecules through a transformation from a dispersed state to an aggregated state. Cationic surfactants cause the gold nanoparticles to aggregate and can competitively bind to the aptamers.

In the absence of arsenic, the arsenic specific aptamers bind to the surfactant so the gold nanoparticles are unable to aggregate. In the presence of arsenic, the aptamers are exhausted due to the formation of an As(III)–aptamer complex so the surfactant causes the aggregation of the gold nanoparticles. This results in a colour change. The colour change depends on the concentration of surfactant left in the solution, which is directly related to the arsenic concentration.

The result is a biosensor that can detect arsenic concentrations of at least 40ppb using just the naked eye and less than 0.6ppb for machine assays. Zhou believes that the advantages of this biosensor, such as the lack of expensive and complicated equipment, a detection time of less than two minutes and a high selectivity over other pollutants means that the sensor ‘can be widely used in most regions, especially in developing countries and rural areas’.

‘The work is especially admirable since real-time ppb-sensitive methods for detecting this toxic metalloid are certainly underexplored in the analytical chemistry literature,’ says Todd Harrop from the University of Georgia, US, an expert in metallobiochemistry and sensing toxic heavy metal ions. He adds that work ‘represents a creative strategy that takes advantage of a high affinity and high stability biomolecule for the selective and sensitive detection of As(III) in a water sample’.

Zhou and his team plan to use the technique to detect other pollutants, such as mercury, cadmium and silver. They aim ‘to integrate the different biosensors into one chip and realise multiple target detection’.