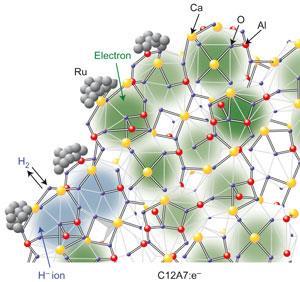 The Haber–Bosch process is used industrially to fix atmospheric nitrogen to produce 160 million tonnes of ammonia per year. Most of this ammonia is then converted in to ammonium sulfate for fertilisers. The synthesis of the ammonia uses an iron catalyst and requires high temperatures (400–600°C) and high pressures (20–40MPa). As a result, it consumes more than 1% of the energy generated in the world each year.

Previous work has found that ruthenium catalysts work well for this reaction at lower temperatures and pressures, but suffer from problems with the catalyst being poisoned by the hydrogen. This poisoning occurs when hydrogen atoms stick to the ruthenium surface. Now, a team led by Michikazu Hara and Hideo Hosono at the Tokyo Institute of Technology have now designed an effective catalyst that can suppress this hydrogen poisoning.

The new ruthenium catalyst avoids hydrogen poisoning thanks to the design of its ligands. The team found that the stable inorganic electride [Ca24Al28O64]4+(e-)4 is an efficient electron donating ligand for ruthenium in this reaction, as it is good at promoting the dissociation of the N-N triple bond. Additionally, its ability to absorb hydrogen ions into its crystal structure reduces hydrogen poisoning.

‘Ruthenium loaded [with this] stable electride worked as an excellent catalyst for ammonia synthesis,’ Hosono tells Chemistry World. ‘[The catalytic activity] is an order of magnitude higher and the activation energy is almost half currently used ruthenium-loaded catalysts. In addition, no hydrogen poisoning is seen even at high pressures.’ The catalyst’s stability in air is also exceptional, he adds.

The electrons encapsulated in the sub-nanometre sized cages of [Ca24Al28O64]4+(e-)4 can be readily replaced with hydride ions when heated in hydrogen gas, explain the authors. ‘This is an intrinsic nature of this material arising from the positive nature of the cage walls,’ says Hosono.

While ruthenium may be more expensive than the currently used iron catalysts, their ability to work at lower temperatures and pressures – and thus reduce energy consumption – means the authors believe they will find use industrially. ‘Ruthenium catalysts are already used to produce industrially important chemicals in large scale plants,’ says Hara. We will, however, also be exploring the use of this ligand with other metals, adds Hosono.

The catalytic performance looks impressive, says Sven Schneider an expert in catalysis at the University of Gottingen in Germany. ‘This work does draw attention to the support as being able to store reducing equivalents. Hence there is also a distinct lesson to learn for catalyst design within the homogeneous community that storage of reducing equivalents might be crucial.’