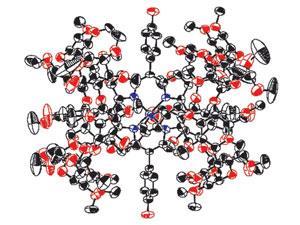 Japanese researchers have created a supramolecule that binds to cyanide ions in a similar way to the blood protein haemoglobin. This could pave the way for faster, more effective cyanide antidotes.

The effects of cyanide poisoning are well known to fans of spy stories and murder mysteries. It rapidly shuts down respiration, and high doses can kill in a matter of minutes. Every year, industrial accidents result in several cases of cyanide poisoning, and there is growing concern that it could be used in a terrorist attack. Unfortunately, existing antidotes are slow to act and often ineffective.

Nitrite antidotes, for example, work by oxidising the iron in the poisoning victim’s haemoglobin. This transforms it into a form called methaemoglobin, which has a high binding affinity for cyanide, and removes it from the site of action. But this is a slow process, with harmful side effects. Koji Kano and colleagues at Doshisha University in Kyoto, Japan, have managed to speed things up by constructing a cyanide-binding supramolecule that mimics methaemoglobin. The complex, Met-hemoCD3, consists of an iron(III)-containing porphyrin held in a capsule of cyclodextrin dimers.

Met-hemoCD3 binds to cyanide ions to produce non-toxic CN--met-hemoCD3, under conditions found in the human body. In vitro tests showed that it bound to cyanide faster than either methaemoglobin, or hydroxocobalamin, a widely used cyanide antidote. The team also tested its abilities as an antidote on rats that had been poisoned with sodium cyanide and it performed well. An intravenous infusion of Met-hemoCD3 successfully revived rats that had gone into respiratory arrest, while untreated rats died.

‘The rate of cyanide binding is fast, which is important for emergency therapy,’ says Kano. ‘And we found no evidence of toxicity.’ He adds that collaboration with medical doctors and industrial partners is now needed to bring Met-hemoCD3 into actual use.

But Gerard Boss, of the University of California San Diego, US, who is also working on novel cyanide antidotes, is unconvinced that Met-hemoCD3 will offer any real advantages. ‘The compound can function as a cyanide scavenger,’ he says, ‘but they have not compared it in vivo to currently available antidotes. All of their comparisons have been in vitro.’ He also argues that the real demand is for antidotes that can be administered via intramuscular injection, rather than intravenously, so large numbers of casualties could be rapidly treated following an accident or attack involving cyanide.