Most probiotic bacteria that are added to foods, such as yoghurt, to aid the digestive system are not reaching their intended target in the intestine. Instead, the majority are being destroyed in the stomach before they can do any good. Now, UK scientists have come up with a coating to overcome this problem.1 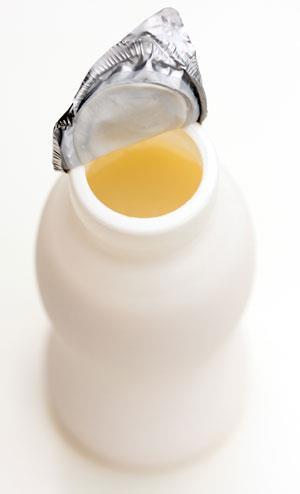 Probiotic bacteria are added to food such as yoghurt drinks to aid the digestive system.

Probiotics are bacteria that naturally live in the small and large intestine. They provide health benefits by producing nutrients, compete with pathogenic bacteria for binding sites and stimulate the immune system.

Materials scientist Vitaliy Khutoryanskiy and microbiologist Dimitris Charalampopoulos and their colleagues at the University of Reading overcame the problem of the bacteria dying before they could enter the intestines by building them a coat of alginate and chitosan layer-by-layer. This coat protects the bacteria as it travels through the stomach to the intestine.

‘Delivering probiotics via the oral route is considered to be beneficial for treating disorders of the gastrointestinal tract including irritable bowel syndrome, bacterial infections and diarrhoea caused by antibiotics,' says Khutoryanskiy. 'However, the majority of probiotic bacteria taken orally cannot pass through the acidic environment in the stomach and remain viable. So, building on our previous work,2 our idea was to protect these bacteria via encapsulation.'

The team dispersed live bacteria in an aqueous sodium alginate solution and extruded it into a solution of calcium chloride to form calcium alginate beads (alginate forms a gel in the presence of calcium ions). Then, they formed a coating around the beads by depositing alternating layers of alginate, a negatively-charged polysaccharide, and chitosan, a positively-charged polysaccharide, on their surface.

‘We have established that the formation of a multi-layered coating can result in efficient protection of live bacteria within these capsules, but the levels of protection and the viability of bacteria are dependent on the number of multilayers deposited,’ says Khutoryanskiy. ‘Encapsulation in the alginate matrixes coated with three layers gave us the highest levels of viable cells.’ They also demonstrated that the capsules release viable bacteria in vitro under the pH conditions of the intestinal tract.

In the future, the team hopes to study the delivery of viable bacteria using their capsules in vivo in experimental animals. ‘We also need to evaluate the shelf life and long-term stability of these capsules under various storage conditions,’ adds Khutoryanskiy.

‘Encapsulating probiotic bacteria for their protection and targeted release is important, as probiotics are apparently important for our health,' says Yoav Livney, associate professor at the biotechnology and food engineering department, Technion, Israel Institute of Technology, in Haifa, Israel. 'Increasing their survival through the stomach is a worthy goal.'

‘The study seems to have been well performed and the results are interesting,’ adds Livney, ‘particularly the fact that increasing the number of layers up to three improved gastric survival of the bacteria. However, above three layers, survival decreased. This was attributed by the authors to the increased swelling and reduced cross-linking density of the capsules, allowing a greater influx of gastric fluid, which the team suggests may be avoided by the re-hardening of the capsules in calcium chloride solution.’