Taiwanese scientists have identified a bioactive compound in ginger that effectively treats bacteria-triggered diarrhoea, the main cause of infant death in the developing world. Hsiang Chien-Yun and colleagues at the China Medical University in Taichung have discovered that zingerone, the active molecule, blocks the bacterial toxin responsible for the diarrhoea from being taken up by the gut.

’Ginger has been used as a traditional medicine for the treatment of gastrointestinal diseases in China and India for many years,’ Hsiang told Chemistry World. Starting with the dried spice, the team took a series of solvent extracts, eventually identifying zingerone as the main constituent of the active fraction. Having shown isolated zingerone to be effective against the toxin, Hsiang then made a series of synthetic analogues of the molecule, identifying one structure that was more potent than zingerone itself. 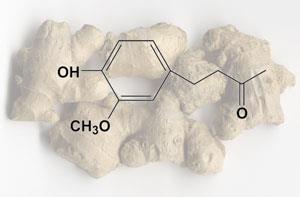 Zingerone is the active compound isolated from ginger

Simon Gibbons, who studies antibacterial natural products at the School of Pharmacy, University of London, UK, told Chemistry World he wasn’t sure the Taiwanese team had isolated the most active compound. ’I was surprised that they didn’t further fractionate their extracts to find the most active compound, instead of just looking at the major compounds in the extract,’ he said. ’But in general they present good data. Ginger itself could be an effective treatment - you could promote people making crude extracts of ginger at home.’

The ginger extracts don’t actually kill the bacteria, but work by binding to the toxin the bacteria release, said Hsiang. The toxin, known as LT, is usually taken up by cells in the gut, where it triggers a cascade response resulting in a huge loss of fluid and ions from the cells. By binding to the toxin, zingerone prevents LT from interacting with receptors on the cell surface, so the toxin doesn’t get taken up. ’I’ve not seen any compounds before that can disrupt this interaction,’ said Gibbons.

Blocking this toxin-cell receptor interaction would be a new way to treat the disease, Hsiang added. Current treatment involves giving antibiotics along with fluid and electrolyte replacements. ’We now focus on other herbs belonging to genus Zingiber to see if they will be better than ginger,’ said Hsiang. ’We hope to collaborate with a research laboratory, international health organization, or pharmaceutical company for human trials in the future.’