A simple micro-array chip developed by scientists in China could sharpen the search for new drugs by enabling the high-throughput screening of drug candidates against cells cultured in three dimensions.

Developing new drugs for the treatment of complex diseases such as cancer is an expensive and time consuming process. Often, the first step in designing a new drug is to use high-throughput screening of large chemical libraries to identify compounds that have the desired medicinal effect.

Most cell-based drug screening technologies currently rely on cell cultures grown in two dimensions (i.e. as a flat layer of cells) and require sophisticated robotic systems to seed the cells and administer the drugs. However, Yanan Du and colleagues from Tsinghua University may have revolutionised the process by developing a micro-array chip that can be used to culture three dimensional balls of cells, called spheroids, and administer candidate drugs on a high-throughput scale.

Du’s chip consists of two plates containing arrays of micro-wells. The micro-wells of the first plate contain porous gelatin sponges. Once cells and culture medium are added, these sponges act as a rudimentary extracellular matrix enabling the cells to form spheroids. Meanwhile, the micro-wells of the second plate are filled with potential drug candidates. Pushing the two plates together brings the drug into contact with the spheroids so the effect of the drug on the cells can be observed. 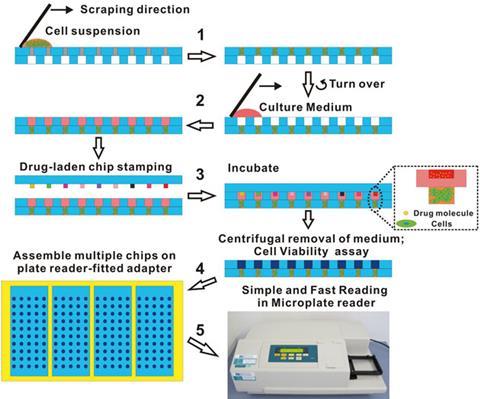 There are two key advantages to this system. Firstly, cells that are cultured in 3D more closely mimic the tissues in the body than cells grown in 2D. Consequently, the effect that the drug has on these cells is likely to be more representative of the effect that the drug would actually have in the body, making the results of the screening process more reliable. Cells cultured in 3D are also more likely to develop drug resistance so these compounds can be weeded out at an earlier stage in the drug development process. The second advantage is that the technique doesn’t require any expensive or sophisticated equipment, and so should be accessible to any laboratory with basic cell culture facilities.

‘By using microwells they can scale-down the number of cells and the amount of drug they use whilst increasing throughput by having a device compatible with standard laboratory instrumentation,’ says Tony Cass from Imperial College London, UK, who also develops devices for high throughput analysis.

Mario Cabodi, an expert in microfabrication at Boston University in Massachusetts, US, says the chip potentially has a promising future: ‘3D cell culture systems, like the one described here, might be helpful in bridging the gap between in vitro tests and in vivo results.’

Du’s team are now in the process of standardising the chip and are collaborating with drug development companies to perform cell-based tests of potential anti-cancer drugs.